We were really looking forward to doing this trail. It's a cool feeling to be on a ski mountain in the summer, surrounded by equipment that is usually reserved for winter. It's a new way of seeing something you normally see covered in snow.

We had a very hard time finding the trailhead. It was a county road, but when we got to the intersection where it was supposed to be there was a new hotel there. We couldn't find a way around the hotel. We knew the road had to be there (they have to maintain the equipment and buildings in the summer) but we couldn't find it. It was very frustrating, and we had a lot of vehicles in a big parade.

We wandered around for a bit and finally we stumbled on the trail on the other side of a parking lot. There were no signs for it, only signs to the stables that were not too far along the trail. It was an annoying start, but we found it!

There were a few vehicles coming down at different points, but there was always room to pass. It had been raining in town, but it cleared up once we got going. Everything was lush and green, and the views of Breckenridge kept getting better and better. This was already starting out as a great trail.

About halfway through it, though, there were signs marking the end of the ski resort. Then the trail changed. It went from a wide and maintained road (although a bit rocky in places) to a narrower and rockier road. The switchbacks were tighter, and we found ourselves on a very scenic and fun mountain trail.

We were well above timberline at this point, and you could see for miles. We could see other skiing areas on peaks nearby as we climbed. We soon leveled out for just a bit, and found some people with snowboards playing in a patch of snow. There was snow on the ground now.

There were some final switchbacks up to some weather monitoring equipment. We started up, following some tracks (probably from the vehicle we just passed). The tracks ended at the first switchback, however, and then we were on our own.

The snow covered everything. It was a wet, heavy snow, making everything slick as soon as it was touched by a tire. The surface under the snow was rocky and loose, but it wouldn't be that challenging if it was dry. Snow made everything different, though.

Everyone found a switchback to turn around on, and we slowly and carefully made our way back to the flat section. After that, it was an easy trail on the way down. It was even more scenic on the way down, watching Breckenridge get larger as we got closer.

This was an awesome trail. We'll definitely be back to do it again when the weather is better. It's not often that you get to drive to the top of a mountain, especially one used by a ski resort. 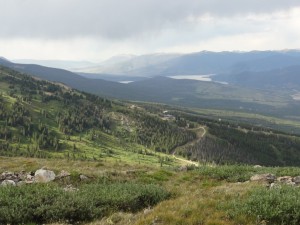 Led by Monica I.
Peak 10 is such an interesting trail, because it’s basically two trails in one. It starts with an easy trip through the Breckenridge Ski Resort and ends with a steep and rocky climb to the top of a mountain. We enjoyed the whole thing. Though we’d been wheeling for 14…
Join Us!
If you aren’t a Member or Subscriber, you can’t see all of the content on this site. Get membership information to see why this site is best when you join and log in