Peak 10 is such an interesting trail, because it's basically two trails in one. It starts with an easy trip through the Breckenridge Ski Resort and ends with a steep and rocky climb to the top of a mountain. We enjoyed the whole thing.

Though we'd been wheeling for 14 years, we never had a "girls run" without any guys driving. Bryan was with us for the first part of the day, but he had to go before we got to Peak 10. That left only female drivers, and it was a fun change.

It was cooling off as the sun started setting, and it was probably going to be cold at the top. As we drove under ski lifts and around padded poles, however, the weather was still nice. We saw quite a few passenger cars and stock trucks filled with people out enjoying the scenery.

We drove past the Overlook Restaurant and didn't see anyone there. It wasn't long after driving by that Monica's "hot oil" warning came on. Her Jeep doesn't enjoy long, slow climbs uphill. We pulled over at the top of the ski lifts to let her Jeep cool off. This is where the trail turns bumpy because the resort doesn't need the road for maintenance anymore. There were cars parked, and people were probably off hiking. We enjoyed the views and put on jackets because we knew it was going to get chilly.

It got windier and colder the higher we climbed. We saw a few bicycles and hikers on their way down as we worked our way up. The first set of switchbacks that took us above timberline were fun.

The long stretch where it is flat was empty. The puddle in the middle of it was actually pretty deep. We took our time going through it.

As we approached the last set of switchbacks we could see the Briar Rose cabin and the weather station high above us. we could also barely see two hikers at the very top of Peak 10.

Those last switchbacks are definitely intimidating, but we had a great time climbing the mountain. Everything is loose and narrow, and the curves are tight. We went up carefully and no one had any issues. When we got to the top, we parked and got out for a long time.

The views were absolutely incredible. We could see Breckenridge below us and Peak 10 next to us. Peak 9 and Father Dyer Peak were on both sides. We took a lot of photos, including of people who were parked on the Crystal Lakes trail to hike to Upper and Lower Crystal Lakes. It was amazingly scenic and we didn't want to leave.

We watched the hikers come down off of Peak 10 and toward us. There was a large patch of snow that they were skiing down on their hiking shoes, and we watched to make sure no one fell. The two hikers were good on their feet, and soon they were down where we were.

We talked to them for a bit, and it turned out they had just hiked the entire range that day. Peak 10 was the end of their hike and they were exhausted. Rather than hiking all the way down the mountain, they rode with us to where the trail got easier, where they parked their own Jeep. It was really interesting to hear their stories.

The trip down the mountain was fairly uneventful, but very scenic right up to the end. We had dinner in Breckenridge before heading for Denver. It was the perfect day. 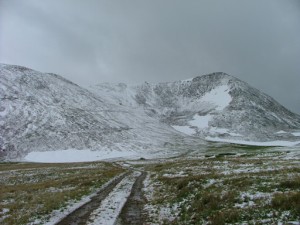 Led by Monica I.
We were really looking forward to doing this trail. It’s a cool feeling to be on a ski mountain in the summer, surrounded by equipment that is usually reserved for winter. It’s a new way of seeing something you normally see covered in snow. We had a very hard time…
Join Us!
If you aren’t a Member or Subscriber, you can’t see all of the content on this site. Get membership information to see why this site is best when you join and log in