Gordon Gulch had been on our To Do List for years, but we never seemed to find the time to explore the area. This time, we made a point to check it out. It was a network of trails but we mapped a path through it and we were looking forward to getting started.

We had planned on jumping into the trail near the trailhead for Peewink Mountain. But the road was marked as a private road so we had to revise our plan. Instead, we took Highway 72 over to the actual trailhead and started there.

The weather looked a little threatening, so a few people put in windows and put tops up when we got to the parking area near the trailhead. We didn't stick around long, though, and we passed a group of paintballers on their way out of the trail as we headed in.

We did a lot of exploring and looping through the network. We soon figured out that the original road that was marked as a private road on the south end was gated at the north end. We found a couple "dead end" signs as well as a gated road that told us that it wasn't possible to come in from the south side.

At one point, we found ourselves in a flat area with a few trees and it started raining. Those of us with windows still out hurried to put windows in, but it wasn't long at all before it started hailing and raining very hard. We were all forced into our vehicles to wait it out, and it lasted for quite awhile. The ground was covered in hail and everything was soaked as we put in the last of the windows. That should make things interesting!

We eventually found a large loop that hung off of the south side of the main trail that gave us a great time. The trip down the hill had a few rocks and slick, muddy spots as we worked our way down. But the way up was even better. There were big, muddy cracks in the trail that were challenging to get through, and big holes filled with slick mud and water.

We were almost all through one of the mud holes when Walt's Blazer just stopped running. It turned out that he lost a connection in the fuel line at one point, and a quick fix using a clamp soon had him running again. It's always a good time to crawl under a vehicle that just went through the mud.

The rest of the mud puddles were a blast, and some of them actually required lockers in places. We were making so many loops that we kept on waving at the same campers as our parade went by. It looked like soggy, chilly camping.

We soon decided that we'd seen enough of the spurs off of the main trail, even though there were still plenty of them left unexplored. The east end of the trail was generally easier than the west end, though there was a nice hill climb on the way out. Still, it was a quick trip up to the Sugarloaf Mountain trail and out to the highway.

We aired up before getting on the highway, and almost everyone went down to Boulder for dinner at Red Robin. We had a great time laughing and talking, and it ended up being a fabulous day of wheeling. 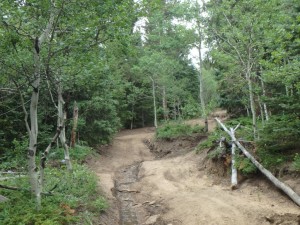 Led by Monica I.
It had been a while since we were on Gordon Gulch, and we were surprised by what we found. Muddy conditions had really changed the trail, making it pretty difficult in spots. There was one spot we couldn’t even do, and another that was a little intimidating. We were staying…
Join Us!
If you aren’t a Member or Subscriber, you can’t see all of the content on this site. Get membership information to see why this site is best when you join and log in