It had been a while since we were on Gordon Gulch, and we were surprised by what we found. Muddy conditions had really changed the trail, making it pretty difficult in spots. There was one spot we couldn't even do, and another that was a little intimidating.

We were staying at the Kelly Dahl Campground for the weekend, and we started the day with Boulder County Hill. Holly had Bryan, Christian, and three puppies on that trail, but after the puppies couldn't keep their breakfasts down we dropped them all off at the campground after that trail. It was just the two of us for the rest of the day.

The trail is easy enough to find, and we found a few people packing up to head for home. There were big ruts in the trail from previously muddy conditions, but the trail was dry for us. We saw a car working its way out, which looked pretty difficult. We didn't have any issues on the main part of the trail, though.

It was the far end of the loop that gave us the big challenges. The twisty section that slid down toward the hole had us out of our Jeeps and considering lines, but in the end it was slick but not too tough or intimidating.

The trail got tougher after that, and all of it was caused by muddy conditions that people found before us.  There was a trench that had big holes in it, and though it was dry we still had to slow down to stay off of the wall.

We went around a corner and found the biggest mess of all, a long section of trenches followed by a big hole with mud in the bottom.  We didn't even try that hole, because it looked like a good place to break something.  Even going around it was challenging, but it was fun.

We soon found ourselves back on the main trail and then it was easy all the way up to Sugarloaf Mountain.  Gordon Gulch promises to get more and more difficult with each passing year, so we'll need to keep doing it every once in a while.  It was fun! 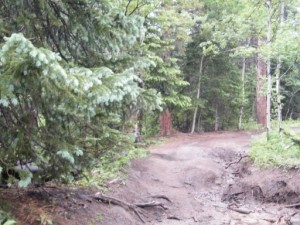 Led by Monica I.
Gordon Gulch had been on our To Do List for years, but we never seemed to find the time to explore the area. This time, we made a point to check it out. It was a network of trails but we mapped a path through it and we were looking…
Join Us!
If you aren’t a Member or Subscriber, you can’t see all of the content on this site. Get membership information to see why this site is best when you join and log in