We came off of Georgia Pass and it was lightly raining as we headed up the Middle Fork of the Swan River trail. There were a few people camping near the start, and we wondered how the mosquitoes were treating them. It wasn't long before the trail started climbing up the steep hill.

There were a couple trucks ahead of us, but they were making good time. There was a new rock in the trail that made one section a bit challenging. Stock-height vehicles had to go around it, putting them close to the edge. The trucks did fine, with good spotting and driving.

A lot of the climb was in a trench, which made it very safe though very steep, still. It was a fun climb.

When we got to timberline at the switchback with the mine tailings, the trucks pulled to the side and we went by them. We cut up the hill and then headed to Wise Mountain. We had lunch there by the cabin, and the scenery was gorgeous. It rained a little bit off and on, but nothing serious. There was a bit of traffic on the trail.

There were mountain goats all over, and they got pretty close to the cabin and where we were. They were all getting rid of their winter coats, and there were some young ones in the small group. They were definitely used to having people and vehicles around them, but they didn't approach us for food. That was a good sign.

After some exploring and wrapping up lunch we headed up to the ridge. There are a few options up the steep hill, and everyone picked their own path. No one had much trouble, though the hill was loose and rocky. It was a great climb to the top.

We went across the ridge, enjoying driving at the top of the world. We passed by Saints John and took the Deer Creek trail down to Montezuma. Then we took Saints John back up to finish Swan River. There were people from the forest service out on dirt bikes and we would see them off and on along the trail.

We went down the Middle Fork of the Swan River trail and it was much looser and rockier than it was when we were there last. We would definitely need to change our usual way around the loop so we did the Middle Fork uphill instead of downhill. It was fun and very scenic. We stopped for a break at timberline and there were flowers everywhere.

We stopped in Swandyke, but only briefly. We had S.O.B. Hill on our minds. We took that trail to the rock garden, and it was raining hard. The rocks were muddy and the garden was very torn up. It would have been fun if it was dry, but it wasn't and it was pretty impossible. Rather than dragging winch lines out we decided to save it for another day. Bummer!

Swan River is such a great trail, and we had a fantastic day. Airing up in the hail and hard rain is always a challenge, but after a great day it isn't too bad. We had dinner in Dillon before heading down to Denver, wrapping up a near-perfect day. 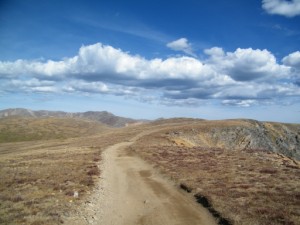