Trail Run on May 20, 2010
Report and photos by Monica I., Trail Leader
View trail information for Secret Spire

We had already completed Spring Canyon Bottom and Hey Joe Canyon, and we ended up with enough time to also do Secret Spire. The day was starting to cool off, and it promised to be a nice run. We also found out that the new version of the Garmin software was truncating tracks by cutting out large pieces of it, and it was going to cause some confusion. In the confusion, we accidentally skipped the overlook section of the trail.

That meant that we went to the right at the "Y" intersection and headed up over the slickrock dome right at the start. It was Mark's first drive up steep slickrock and he really enjoyed it. The rest of us got a kick out of his enjoyment, and that was great.

We parked for a bit at the top of the dome, stretching our legs. Then we were off to Dellenbaugh Tunnel. Two of the three GPS units had the bad tracks at this point, and they just ended. Luckily, Roger had transfered his tracks over using different software and he had the whole thing. That meant that he would now be leading us the rest of the way to the tunnel.

We found the tunnel and walked through it to the other side. It's a short tunnel, but it's still fun. We explored a little bit on the other side, but then we were soon back in our Jeeps and on our way.

Getting over the slickrock section up to Tombstone Butte was almost as much trouble as it was the first time around. Monica remembered most of the twists and turns, though, and we found our way eventually. That's definitely a difficult section to find.

Once we were on the dirt trail again it was easy going to the end at Secret Spire. We ended up spending a lot of time at the end, taking pictures and relaxing. No one was in a hurry to get back, so we just enjoyed ourselves.

But then we had to head back. We took a shorter way back to town this time and it was much easier. We had a good dinner in town, and then later in the day we saw Robert and Andrew again when they came back from their own day of trails. Everyone had a great time. 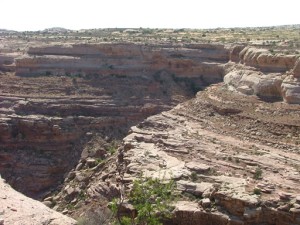 Led by Monica I.
We ran this after Hell Roaring Rim, and it was another new one for us. We were trying to follow the trail that is run for Easter Jeep Safari, and we’re pretty sure we found the right trail. We started off by doing the third that goes to the overlook….
Join Us!
If you aren’t a Member or Subscriber, you can’t see all of the content on this site. Get membership information to see why this site is best when you join and log in