Trail Run on May 30, 2008
Report and photos by Monica I., Trail Leader
View trail information for Secret Spire

We ran this after Hell Roaring Rim, and it was another new one for us. We were trying to follow the trail that is run for Easter Jeep Safari, and we're pretty sure we found the right trail.

We started off by doing the third that goes to the overlook. We found it pretty easily. Though it is definitely not the most scenic overlook in the area, it was pretty cool. Both Steve and Michael drove out to the very edge. It seemed very loose under their tires, unlike the end of Top Of The World. Scary!

After the overlook we came back, expecting to drive around a big fin. Instead, the trail took us right to it and we drove up and over it. That was a nice surprise! It was a fun and steep climb, much like some of the climbs on Fins & Things. The view from the top was really nice, too.

We came down off of the fin and worked our way to Dellenbaugh Tunnel, following signs. There was a nice parking area, and we brought flashlights to prepare for a big tunnel at the end of our hike.

The hike was short, and the tunnel was much smaller than we expected. It looks bigger in pictures. Tusher Tunnel is much bigger. Still, it was pretty cool. On the other side, a hawk circled above our heads and yelled at us. Steve scared us all by working his way along a ledge for a bit. It was nice and relaxing on the other side.

We left Dellenbaugh Tunnel and worked our way up to the Tombstone Butte. The trail was extremely difficult to find at the very end, and we burned through a lot of time. We had to walk a long way to scout out the trail, but at least we could find it at the top end. It was a mess, but we're pretty confident that we found the correct trail.

Steve left us at that point, and Michael and Monica continued on to Secret Spire. That third leg only took about 30 minutes, and that was about all of the good light we had. It was worth it, though. The Secret Spire is really weird and really cool! It doesn't look like it should be able to balance like that.

The trail on the way out was the only dusty part of the day, but at least it was quick. We were soon back out on the highway and heading back to Moab. We put on a lot of miles in one day, but we saw a lot. It was a great day. 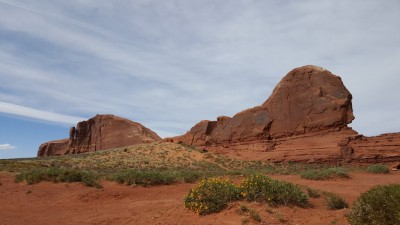 Led by Monica I.
It had been way too long since we’d been on Secret Spire.  It was a new trail for a few of us, too, and we were looking forward to it.  We’d already seen some amazing sights, and it was mid-afternoon when we started the trail.  It was easy to find…
Join Us!
If you aren’t a Member or Subscriber, you can’t see all of the content on this site. Get membership information to see why this site is best when you join and log in