We left from the tiny town of Montezuma and headed uphill. We talked for a moment about doing Hunkidori Mine, but we planned on wrestling with S.O.B. Hill later so we skipped it. S.O.B. Hill proved to be too difficult in the rain and mud, so it turned out to be the wrong decision. We'll have to explore the Hunkidori Mine another time.

The climb up the ridge is always fun. We had a few creek crossings, and the cabin in Saints John was in great shape. We were on our way up just past the old mining area when we spotted a moose and her baby in the trees. We stopped to get out to take photos, and some hikers stopped to get some, too. They were very skinny and hidden by trees most of the time, but it was cool to see them. They didn't stay long before heading up the hill and deeper into the trees.

We kept climbing up the trail, and soon we were above timberline. The trail up there is really scenic as it hugs the edges of steep ridges. We could see the Deer Creek trail on the other side of the valley, the trail we just did. It was gorgeous all around.

It was raining for a bit, but then it let up. When we got to the end of the trail at Swan River we talked with a couple people from the forest service who were there on dirt bikes. They were friendly and helpful.

We ended the day with a trip down the Middle Fork of the Swan River trail and then aired up in the hail and driving rain. Even with the weather we had a great time! 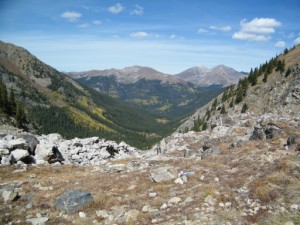