How odd is it that we just ran Saints John for the first time as a group? It's a popular trail in an area we spend time in, so it was very weird that this was the first time. So many trails, so little time.

We just had a fabulous time on Santa Fe Peak and Saints John is a block away in the town of Montezuma. We found it easily and headed up. We passed by the Hunkidori Mine trail, one we had fun on just a few weeks earlier.

There was a bit of traffic at the start of the trail but everyone managed to find room to pass people. When we got to the town of Saints John we just drove by.

We stopped at the side of a wide spot in the trail for a little break and then a Jeep Commander came down. The driver ended up getting high centered so Matt used his winch to pull him off of the bump. Matt was happy to use his winch to rescue someone other than himself for a change (it's been a rough year for Matt!).

We passed a couple of ATVs on the switchbacks climbing out of the trees but there was plenty of room. We were out in the sunshine again and everyone was happy.

At the spur we decided to check it out. We got around a couple vehicles here and headed down. It was very tippy but there were some fun rocks. When we got to the end the trail simply ended without warning, though we saw a few tracks in the dirt from others who had turned around. There was plenty of room to park our entire group so we got out for a break. It was really pretty there.

Once we got back to the main trail we didn't have far to go. The rest of the trail was bumpy and very scenic. We all enjoyed it. 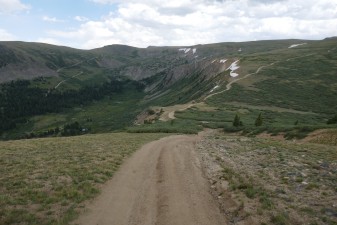 Led by Monica I.
Saints John and Deer Creek both leave from Montezuma and head up above timberline, but they do it across a valley from each other.  They’re both amazing trails, and this time we did Saints John to get back up to elevation.  Naturally, it was gorgeous. We saw a few people…
Join Us!
If you aren’t a Member or Subscriber, you can’t see all of the content on this site. Get membership information to see why this site is best when you join and log in