We saw bits and pieces of Rampart Range Road throughout our day as we did a lot of the trails in the area. First we saw just a little bit of it between Dakan Road and Long Hollow Road, then we saw the majority of the south end and middle of it as we worked our way up.

Ladd left early, and he took Rampart Range Road all the way out to the north. Technically, Ladd was the only one who saw the entire trail. The rest of us saw different pieces of it as we split up throughout the day.

We came down Highway 67 from finishing Long Hollow Road and most of us gassed up in Colorado Springs before we headed up to the Garden of the Gods park. Those who gassed up would be able to finish the day, and those who didn't would have to leave early. We covered a lot of miles in one day, and a lot of us went through just a bit more than an entire tank of gas.

We started into the park and unfortunately got behind a tour bus. There was a long line of cars as the bus got to speeds of 5mph with many stops along the way. It took us awhile to get to Balanced Rock even though it's not very far into the park. Even though it was slow going we all had a chance to enjoy the scenery, which was a nice benefit.

We had a hard time finding enough parking, but we worked it out. Then we all sat on some rock ledges and had a great lunch. We definitely attracted some attention -- you don't often see a large group of people having lunch together at a tourist area like that. We even took a silly picture of everyone pointing in a different direction.

The start of Rampart Range Road at the south end was a lot different than the road to the north and in the middle. It was very rocky and bumpy for quite awhile.

There were some gorgeous houses on that end, and a shooting area fairly close by that was pretty crowded.

We were getting close to Schubarth Road when the trail finally mellowed out. It was bumpy, but the views were amazing.

This would be a great trail to do on its own for someone in an SUV or someone who is new to wheeling.

The best part was lunch at Balanced Rock in the Garden of the Gods park. The sun was out and it was the perfect temperature when we got there.

Use the arrows or dots to flip through the previews of the other reports for Rampart Range Road. Click one of them to read more and see all of the photos from that day. 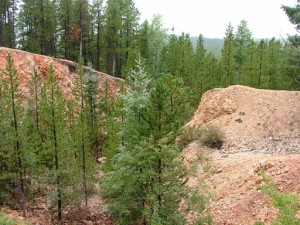 Led by Monica I.
It was chilly and raining as we worked our way through Sedalia and over to the north end of Rampart Range Road. We had big plans to finish Winding Stairs Road, and there were some mines we were hoping to check out on the way. We aired down to save…
Join Us!
If you aren’t a Member or Subscriber, you can’t see all of the content on this site. Get membership information to see why this site is best when you join and log in