Trail Run on May 20, 2010
Report and photos by Monica I., Trail Leader
View trail information for Hey Joe Canyon

We still talk about our last trip to Hey Joe Canyon. We all said we'd never do it again. The tamerisk was all over the place and trees hit our vehicles. It was difficult to drive through and bugs were everywhere. But we'd heard that the tamerisk was under a bit of control now, and it wasn't nearly as bad. We decided we'd check it out again.

We ran Spring Canyon Bottom and had a really good time. Then we came back to the Hey Joe Canyon trailhead and started down the trail. It was hot and dusty.

But the rocky sections were fun. There was one in particular that Bob and Mark had a lot of fun on, both on the way in and on the way out. Everyone really enjoyed the challenges.

It was also pretty cool to drive so close to the river. At times, it seemed like the trail was too narrow and its edges were too loose. But no one had any issues.

It did seem like the vegetation was a bit more in check, too. In many places, we could see that the BLM was maintaining the trail, cutting back the tree branches. We remembered driving through the brush in places before, but now it was simply next to our vehicles. It really wasn't bad at all.

Julie was in the lead, driving slowly through some light branches. She came to a bend in the road and had about a second to slam on the brakes as a guy on a dirtbike ran into the front of her Jeep. Luckily, he also wasn't going very fast. But he wasn't able to avoid the accident.

He broke a bit of the bike but not enough to stop him. We stayed with him for a bit to make sure he was okay, but he had to get back to town for an appointment. So we parted ways at that point. Of course, Julie's tailgate on her Cherokee refused to close because the latch was broken at that point. She used ratchet straps to close it, and we moved on.

The tightest spot of trees is just before Hey Joe Canyon itself, and that wasn't too bad at all. However, the trees still brushed against our vehicles.

When we got to the end we were a little disappointed to find that the mine was caved in. We weren't surprised, though. Bob was happy that he'd seen the mine on his previous trip. We had lunch in a bit of shade we found, enjoying the solitude.

Of course, we still had to make our way back. On the way back we noticed that many of the cactus flowers had bloomed since we last drove by them, and that was pretty cool. Many pictures were taken.

We drove back out of Spring Canyon Bottom, enjoying the drive up the switchbacks. When we came to the intersection with Secret Spire we took it. 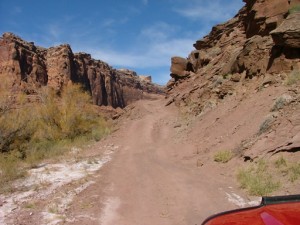 Led by Monica I.
The Wells book describes this as a difficult trail so we wanted to check it out. It didn’t turn out to be difficult at all. Instead, it ended up being quite a nightmare of trees and bushes and we all ended up with scratched paint on the outside with trees…
Join Us!
If you aren’t a Member or Subscriber, you can’t see all of the content on this site. Get membership information to see why this site is best when you join and log in