The Wells book describes this as a difficult trail so we wanted to check it out. It didn't turn out to be difficult at all. Instead, it ended up being quite a nightmare of trees and bushes and we all ended up with scratched paint on the outside with trees and bugs on the inside. We're all undecided about whether or not the mine at the end made it all worth it.

Spring Canyon Bottom was mellow but gorgeous. It was cool how close the Green River was when we started the Hey Joe Canyon trail, but you couldn't always see it. Most of the time you were entirely surrounded by trees and bushes. Some of the trees were actually pretty big.

Steve slammed into a hole pretty hard, starting a weekend of scooping up sand with his winch every chance he got. Some of the rocks were pretty cool, making for some decent obstacles. Nothing was difficult, however.

We were all about over it by the time we got to the mine. People either had scratched Jeep windows or a mountain of greenery in their vehicles. Steve was lucky with glass windows, though his Blazer was larger and made for more scratches.

We went into the mine for a little bit, then came back out to get the rest of the group and some more flashlights. We explored quite a bit of the mine, finding actual uranium (redish-colored rock) and sulfur (yellowish-colored rock). We took some pictures at the very end. It was cool in temperature but also very humid, and we were all winded and coughing when we came out due to the dust inside.

We groaned about having to go back out as we ate lunch outside the mine. We made it back out, with more bugs in the afternoon. It was a cool trail with the mine at the end, though I doubt we'll be doing this trail again. 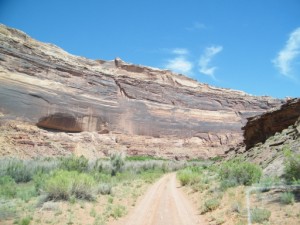 Led by Monica I.
We still talk about our last trip to Hey Joe Canyon. We all said we’d never do it again. The tamerisk was all over the place and trees hit our vehicles. It was difficult to drive through and bugs were everywhere. But we’d heard that the tamerisk was under a…
Join Us!
If you aren’t a Member or Subscriber, you can’t see all of the content on this site. Get membership information to see why this site is best when you join and log in