Trail Run on May 12, 2011
Report and photos by Monica I., Trail Leader
View trail information for Gemini Bridges

It had been almost seven years since we had been to the Gemini Bridges and we had heard that a lot had changed. The last time we were there we could drive up to the bridges, and we heard that some people were even driving across them. We knew that was no longer possible but we wanted to check it out for ourselves.

They had closed the end section in 2008. They had also made some nice parking areas and a kiosk explaining more about the restoration area and the bridges themselves. It was easy to find the area and we shared the parking lot and hike with quite a few other people.

It was nice to be at the bridges again. It was definitely a popular spot. We walked around a lot and enjoyed the scenery.

The end of the trail closest to Highway 313 was "like butter" as someone remarked. It was very smooth and nicely maintained all the way to the bridges. The other half was just as bumpy as it always was, and it didn't seem like much had changed. They had closed off a spur that we once took, but otherwise there were no other changes.

We went part of the way into the Gold Bar Rim trail to check out Improbable Hill and get to the Little Canyon trail. Terry and Austin both gave it a good try but neither one could get up the obstacle. It's definitely a challenge!

We were glad that we weren't out there on a Saturday or Sunday because it was already pretty packed with people. Still, it was a gorgeous trip with beautiful skies and perfect weather. 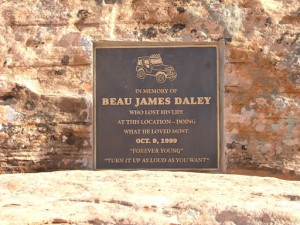 Led by Monica I.
This is a short trail when you’re already out in that area (we did it right after Metal Masher). It went by pretty quickly and we didn’t play in the rocky area on the way there. We made it to the Bridges well before the sun went down. Some of…
Join Us!
If you aren’t a Member or Subscriber, you can’t see all of the content on this site. Get membership information to see why this site is best when you join and log in