Dome Plateau was our second trail for our Moab trip. We started bright and early after our first night in Moab. It was going to be a nice day with some clouds and temperatures on the cool side. We aired down in the parking lot by Dewey Bridge. The start of the trail was just on the other side of the Colorado River.

The beginning of the Dome Plateau trail had a short rocky section with some small ledges. We all had some fun playing on the small ledges. Then we were at the gate. We opened and then closed the gate after we all went through it.

We stayed on the main trail of Dome Plateau. We all took the shortcut, because it was more challenging and fun. None of us had any issues with shortcut.

Soon we were at the "Y" intersection in the trail. We went to the second overlook first. The trail to the overlook was easy and we enjoyed the views. Then, after the overlook, we took the other fork to see La Boca Arch. It was a small, short trail off of the Dome Plateau trail. The trail was steep in a few spots. The trail to the Arch was not difficult and soon we were at the La Boca Arch. We all walked around the arch for a short time, and it was worth taking the drive out.

The next stop on Dome Plateau was the Wash. We all had fun going down the optional section. Julie got high centered on a rock at one point, and it took her a few tries to get off the rock. The rest of use did not have any issues with the Wash. 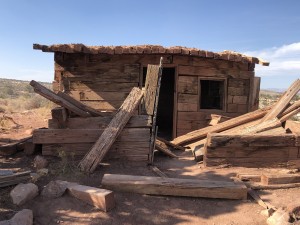