We were planning a marathon day -- to do seven trails in a row. We hadn't been down to the Rampart Range Road area of trails as a group, though a few of us had been there individually over the years. It is a great area because there are many trails all grouped together, and Dakan Road is a fantastic way in.

We met at the Conoco station in Castle Rock, and it was cool to see Dave E. back from Minnesota to join us. We gabbed for awhile and then headed one exit south to Wolfensburger Road. It wasn't long before we were on Dakan Road, and it turned from pavement to dirt. It was raining a bit and it wasn't very warm, and we were thinking that the rest of the day would be like this.

We stopped fairly early in the trail at a wide parking area to air down a bit and disconnect sway bars. Even though the trails weren't supposed to be too tough, we like a smooth ride. The weather had even started clearing up.

We were glad we had disconnected and aired down when we saw the rough patch. The first part is a strange hill of cement blocks in the sandy dirt. It was probably part of a smooth road at one point, but the sand around it has eroded away a bit. It wasn't too difficult to get over, but the next bit was more challenging.

We flexed and twisted our way through it because everyone took the harder line on the left. It was a nice surprise in the middle of the trail.

When we came to the big bump of rock we were again surprised -- there was a Volkswagen bus on the other side, coming our way. It couldn't be too difficult if the bus was doing it. We didn't stop to explore the rock because we needed to get out of the way of the VW, so we were off.

At the crossroads, we decided to take the longer way out Jackson Creek Road. It was scenic and steep in places, but not difficult. There were some cool rock formations at the sides of the road in places, and we enjoyed the scenery.

At the end, we ended up on Rampart Range Road. We headed just a bit south and started Long Hollow Road. Dakan Road was a nice trip and we enjoyed it. 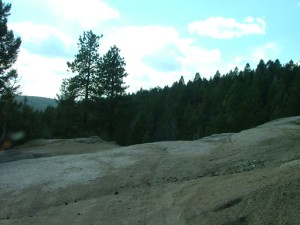