We just had a leisurely BBQ on the Chinns Lake trail and we were starting our adventure in the network of trails around Yankee Hill. We had often used Cumberland Gulch as a way in and out of the network, but we were adding a little bit to the trail this time -- a spur down Washoe Gulch.

We were already aired down, so we just headed right up the trail. At the intersection with Washoe Gulch we continued up Cumberland Gulch first. We planned on going down the new spur instead.

We stopped for a little bit in an open area next to a fenced-off pond. Everyone enjoyed the opportunity to get out and chat, stretching our legs in the process. The dogs ran around, and everyone enjoyed the little break from the bumps. The scenery from there is fantastic.

The rest of the climb to the Yankee Hill trail was pretty mellow. We followed it for a short bit as it took us farther north, but then we turned west when Yankee Hill went east.

A short distance later we met up with the intersection to go up to the top of Yankee Hill. We did that loop, coming back down to finish Cumberland Gulch.

Marcus left us when we got back to Yankee Hill. The rest of the group went down Washoe Gulch. We all agreed that it was rockier and more fun than the rest of Cumberland Gulch, and we'd be doing it in the opposite direction next time. It would be a fun climb!

Once we got back to the intersection with Cumberland Gulch we headed back up to check out Sheridan Hill. It was already a good start. 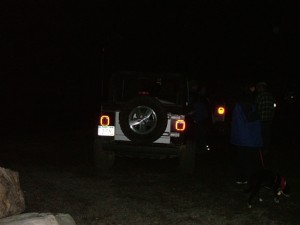 Led by Monica I.
We had just done Yankee Hill at night, and we attempted to watch the Perseid meteor shower from the top. It was too cloudy, though, and the full moon meant it was pretty bright. We still had a good time, and we took Cumberland Gulch out. We had marked the…
Join Us!
If you aren’t a Member or Subscriber, you can’t see all of the content on this site. Get membership information to see why this site is best when you join and log in