It was a gorgeous morning, one that was perfect for a day of exploring. We ended up getting a late start due to alarm clock issues, but we were eventually on our way. There were eight in our group and it was a little difficult keeping everyone together as we drove through Loveland. Once we were out of town it was a peaceful drive in the hills.

Ballard Road was the first of four trails we planned on exploring on this run and we had a mellow start to our day. We aired down and disconnected at a big turnout shortly before the trailhead on Buckhorn Road, and then we were on our way.

The trail started as an easy road with "no trespassing" signs posted on each side. We made sure not to stop in this area. We climbed for quite a while, passing what appeared to be driveways. We continued to climb, passing a spur on one of the switchbacks that looked very tempting. But we stayed on the trail, determined to reach the top.

We passed a couple of spurs, but at about five miles up the trail there were some mines on the GPS and a spur off to our right so we decided to explore it. This turned out to be the best part of the trail. This spur climbed higher in elevation and had some rocks to negotiate, but the best part was the lean that really had Gary's attention the whole way up. It turned out that the spur looped back onto itself, so we got to experience the lean again as we headed back to the main trail.

We knew there were mines nearby on the spur, but we could not see them from the trail. We decided not to waste time looking for them, so we kept driving.

Once back onto the main trail we continued to climb toward the top, passing piles of wood on the side of the trail. They looked to be edgings from a sawmill.

The trail ends at a very large pile of wood. We managed to get all eight vehicles parked and decided it would be a good place for lunch. After a relaxing lunch, we backtracked down the mountain. When we reached the spur on the switchback, we stopped for a moment and took a vote if we should explore the spur or not. We decided we needed to get to the next trail. Some research discovered that this spur is called Greer Road. We definitely need to check this out the next time we are in the area and have more time.

Our group headed back to the trailhead looking forward to our next trail. 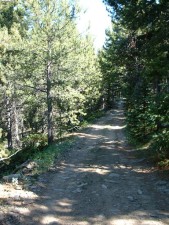 Led by Monica I.
This trail is west of Ft. Collins quite a way, and the directions we followed were really bad (Charles Wells must have been drinking that day). After a few hours we found the trail, but it wasn’t much more than a very steep road. At the very top of the…
Join Us!
If you aren’t a Member or Subscriber, you can’t see all of the content on this site. Get membership information to see why this site is best when you join and log in