This was our first time on 21 Road and it soon became the favorite Colorado trail for most of us. Though it's fairly short, it took us all day. It's good to know that next time we can play more on the obstacles near the end.

It was already hot when we were airing down and disconnecting, and the trail is low in elevation and in a wash so we knew we'd be cooking all day. There were shady places all the way through, though, so it wasn't too bad. We got going and it wasn't long before we were at Monster.

We couldn't believe people actually went over that rock! It's huge. We all went around it instead, and no one took the easy bypass.

Monica went first, thinking she'd keep her tires high on the rock slab and just tip her way through it. Her tire was muddy, though, and she slipped right down and ended up pretty stuck with all four tires on the edges of a big rock. She worked on it for a few seconds and was free, then drove around Monster without hitting it (though it was close).

Don was next, trying to stay up on the slab on the side but sliding down, too. He was really, really stuck at that point, and he couldn't back out of it either. Here we were, stuck on the first obstacle. Monica winched him forward and he was free.

Robert went next, sliding off the slab just like everyone else. He got his right, front tire up on the rock just next to Monster by accident, but that ended up working really well. It gave him the height he needed to get over the rock underneath him, and he was over it without a problem.

Bob was next, getting up on the big slab. He took it even further, actually hanging his tire over the other side of the slab. That worked, and he didn't slide down. He was over it without any issues. When he was going around Monster he hit his soft top on it, and it took a little bite.

Gary came next and slid right down to get very stuck. The guys put a few rocks in the holes where his tires were hanging, and he used them to get over it.

We were only a little way into the trail and already having a blast. This was going to be a great day!

There were a few rocks here and there, and everyone was playing. Gary played enough to get stuck and needed to be winched out.

We came to a twin set of rocks placed where our tires would need them. Monica went up and over, but one of the rocks was pretty big and she needed her rock sliders to get over it.

Don decided to get tippy instead and only ran his tires over the big rock. He got a lot more tippy than he thought he would, though, and the guys had to stand on the side of his Jeep to keep him from going over.

Robert thought he'd try Don's line over the twin rocks, and he got very suddenly tippy. His cooler tipped over and he lost some ice, and his eyes got really big. The guys stood on the high side to get him through it.

It was a flat, wide spot with another spot of shade, so we stopped for lunch. It was a really great spot and we enjoyed our relaxing time. Everyone had fun throwing rocks at targets across the Little Salt Wash.

Once we got going again we were pleasantly surprised by the difficult ledges. No one was up to taking the crazy line in the middle or the tippy line on the right, so we all worked our way through the left side.

Monica had to work on it a bit but she made it through. Don got pretty stuck, so Monica winched him through. No one else had an easy time, but we all made it. Gary hit the wall with his door frame, losing some paint.

At that point, two trucks on huge tires came up behind us. Once we got to the other side, we let them pass.

We enjoyed the shade right before the Squeeze, and also enjoyed watching the trucks work their way through it. One of them didn't have lockers so he took the bypass.

Monica went through it first. She tried a line that looked good, but ended up catching her rear corner panel on the first rock, leaving some paint and getting some big scratches.

Don went next, and he missed hitting his paint. He caught his fender flare pretty hard, though.

Robert decided to go high up on that big rock instead, then got a little hung up. He gave it some gas to get through it, and it worked. It also put him very, very close to flopping over. He should have gone over, but he gave it even more gas and ended up staying on his tires. That was close!

Bob came next and hit his rear corner panel where Monica hit hers. He even got a little red paint on his Jeep from where Monica left it. He also got his fender flares.

We figured Gary would squeeze through without hitting anything, but he managed to catch his rear corner panel too. Luckily, he has corner panel protection so he didn't get any true body damage.

The Squeeze was a great time, even though we all managed to mangle something!

We came around the corner and noticed the trucks having issues, then they decided to play it smart and turn around. That was the last time we saw anyone on the trail.

We played on some rocks here and there, having a great time. Monica backed into a rock and really mashed in her rear corner panel.

Robert was going over the same rocks and we saw his front tire jerk at the same time we heard a loud ratcheting noise. We thought he broke something, but it must have been his Detroit locker slipping.

We walked a bit down the Toyota Rock section, though no one tried getting up on that big rock. We were enjoying a lot of shade, and things cooled down nicely.

We started in on the bigger rock obstacles at Jeep Lane, and almost everyone walked up to the big parking area under the overhang. Then we got to it, with everyone working on something.

Bob got turned around on a rock and caught his license plate holder and bumper on a rock behind him, getting some more trail damage.

Carnage Corner was fun, though it was really tight on the way through. Monica almost hit her front fender, and Don almost hit his. Bob wasn't so lucky, and his front fender is even more messed up. He managed to hit all four of his fender flares on one trail.

No one even considered trying Insanity. Those rocks are way too big for us! The bypass was really tippy. Monica started up the bypass slowly, but was slipping. She thought she'd try another way, but the rocks moved and she was really stuck.

Don went by her on the bypass, sliding off toward the edge. He got by, and Monica winched up with Don as an anchor.

The others took the bypass using a little speed, which proved to be the best way to stay up on the banked, tippy trail.

It wasn't long before we were at the end of the trail. We were ready to do it again! We followed the dirt road out to the highway, then grabbed a quick dinner of fast food in Fruita. What an awesome day! 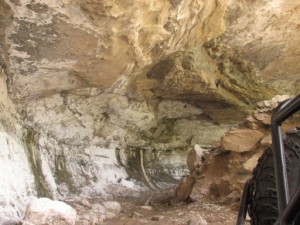 Led by Mark U.
Mark and Robert headed to the trailhead for 21 Road at around 9:30AM. The wind was absolutely howling in the Grand Valley and we were hoping that it would calm down or we’d find some shelter from it in the canyon. It was a nice day otherwise and we were…
Join Us!
If you aren’t a Member or Subscriber, you can’t see all of the content on this site. Get membership information to see why this site is best when you join and log in