Trail Run on May 29, 2011
Report and photos by Mark U., Trail Leader
View trail information for 21 Road

Mark and Robert headed to the trailhead for 21 Road at around 9:30AM. The wind was absolutely howling in the Grand Valley and we were hoping that it would calm down or we'd find some shelter from it in the canyon. It was a nice day otherwise and we were looking forward to the last trail of our weekend around Grand Junction.

As we got to the head of the canyon we noticed that there was a group ahead of us that looked like they were having fun but getting pretty stuck in the process. The nice thing about the start of 21 Road is that there is a "frontage" road above the creek bed that you can take to get around people. We decided to forgo the first of the little obstacles and we drove along the frontage road to the next entry point into the creek bed.

There was trickle of running water in the creek bed and we knew that the water was going to add another dimension to the trail. We were picking our way through the rocks when we came around the corner and found another group of vehicles. Robert was playing on a rock when his starter started acting up. Then his Jeep's starter fell out and grounded his ignition, blowing up his maxi fuse.

We did not have a spare and neither did the group in front of us. One of the guys in the group in front of us was nice enough to temporarily lend Robert a fuse so that Robert could get his Jeep off of the trail. Luckily, we weren't too far from the beginning of the trail. Robert jumped into Mark's Jeep and Mark raced him back to his truck so he could run into town and get a fuse. About 30 minutes later Robert was back with fuse in hand and in short order he was able to get his Jeep going again.

We continued on until we got to a big rock obstacle on the right with a huge drop off. Robert went first, and after two or three attempts he spun on his skid plate on the flat part of the obstacle. That and some huge flex helped him clear the obstacle. Having 40" tires and a lengthened wheelbase really proved to be helpful on this obstacle.

Mark was next. He got through the first part just fine but he got pretty close to the canyon wall, scraping up the whole side of his Jeep in the process and bringing down a lot of dirt into it. He finally got through the first part but only having 35" tires and a shorter wheelbase caused him to essentially high center himself with his front wheels dropped all the way down and still not touching the ground. He threw Robert a strap and they dragged him off the last big rock.

Moving up a little farther along the trail, Robert's starter was acting up again so we stopped and realized that one of the mounting bolts was stripped. Mark went to go dig in his bolt collection and as luck would have it he was able to find one that fit perfectly. We got lucky that time.

We continued to the large overhang and the Squeeze obstacle. Robert was able to get through but not without the boulders claiming some paint. It took a little while and a little spotting, but he was able to clear it. Mark jumped in and remembered Robert's line and the mistakes he made at first, so he decided to hug the right-side wall a little closer. This beat up his left rear quarter panel quite a bit, but with Robert's careful spotting Mark managed to make it through. It's a tough obstacle, for sure.

At the next obstacle we got to we noticed that there was a large group of people stopped and chatting. It was the group that we had gone around earlier in the morning. The obstacle ahead of all of us was pretty tough. Robert began by twisting up on a huge boulder giving him a pretty impressive wheelstand. Everyone cheered as Robert did battle with the boulders but unfortunately he got both of his axles hung up on them. With no forward or backward place to go, Mark decided that it was time to bust out the famous Hi-Lift Jack to attempt to lift him high enough to put a few rocks underneath his tires. After a few attempts with trials and errors, Robert drove off the lifted jack and was able to negotiate the rest of the obstacle with lots of cheering from the gathered audience.

Mark was next and had similar problems. He took a slightly different line but it still got him hung up on his front axle. After getting through the majority of the obstacle, Robert had to pull him through to get him over the boulder under his skid.

We continued for about another half-mile or so and got to another boulder field. Robert began but then heard the sickening and familiar sound of a hub busting. We stopped and changed out the mangled hub with the spare that he had. After getting the repair complete Robert backed up to go around the obstacle and got the back end of his Jeep high centered on a rock. This usually would not have been an issue but his front tires were not spinning. We could see that the front driveshaft was spinning but not the tires.

It was already late in the afternoon at this point. We didn't know if Robert's issues were his Jeep's gears, axle shafts or his locker, so we decided to call it a day and head back to town. As we broke out of the canyon where the wind had been gusty all day we were greeted by a huge sand storm. Even though we didn't see the last of the obstacles it was still a fun day on a fun trail. 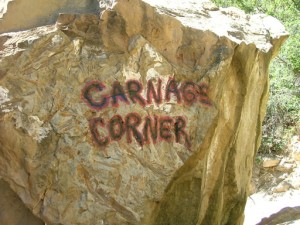 Led by Monica I.
We met at the Safeway and we were pleasantly surprised to see Ladd, who had driven from Lyons that morning just to run 21 Road. When Robert showed up, he had his brother Pat in the passenger seat, which was also a nice surprise. It was already sunny and warm…
Join Us!
If you aren’t a Member or Subscriber, you can’t see all of the content on this site. Get membership information to see why this site is best when you join and log in