We had run a lot of trails already and the group split in half. One half went home via the Mount Herman Road trail, while the other half took on Winding Stairs Road. We didn't have much information about the trail, but we were excited to check it out.

It started out much like the other trails in the area. There were smooth dirt roads mixed with some rutted areas and lots of puddles.

We came to the intersection with Ice Cave Creek Road fairly quickly, and we stayed to the right to keep on Winding Stairs Road. It immediately got more fun, with some dips and cracks in the trail.

We found ourselves at Trickle in just a few minutes, and from the top it looked pretty bad. It was challenging, but mostly it was fun.

Monica went through first, getting some good flex near the end. Then she got out to take pictures. Gary weaved his way through it getting some especially good flex when his front tire went down in a hole.

Mike was next, flexing so much through it that the body of his TJ barely left level. Walt put on the best show in his Blazer, though, because he got a ton of flex and a little bit of air under his rear passenger-side tire on the way out of the ditch.

We were all grinning and excited to see what else the trail had in store. It was wet but luckily it had stopped raining for the evening.

The next bit had a fun, steep hill followed by some really tippy parts around a hill. We took it slowly and started our way down a hill when we noticed a really big, dead tree blocking the trail.

Monica stopped right in front of it and everyone else came down to check it out. Gary figured we'd winch it out of the way, so he started hooking up Monica's winch with a tree strap.

Mike had other plans, and soon started chopping away at it with a hatchet. He worked on it for a bit, then Walt finished it up and it was in two pieces. The smaller end would stay up on the hill on the right side of the trail.

The group got together and kicked and pushed the bulk of the tree off to the side, and we had a clear trail. We got in our vehicles and continued on.

There was another fun ditch with a bypass, then we came to the Sluice. It looked tough, but it was downhill and we knew we could get down it. The part by the tree was going to be tricky, though. The sun was almost down as we discussed our options.

In the end, we decided it would be best to turn around and do Winding Stairs Road another day. We were mostly concerned about getting back up the Sluice and the rest of the trail in the dark, especially if it started raining again.

The tippy parts were still just as tippy, and the ditches were still a blast on the way up -- maybe even better.

We took Ice Cave Creek Road on the way out, and soon found ourselves back at Rampart Range Road. We went further south to take Mount Herman Road out to Monument for some dinner. We'll definitely be going back to this trail so we can finish what we started. It was a blast! 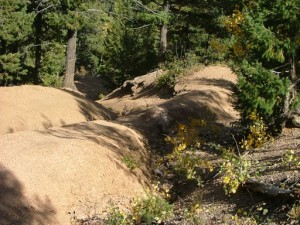 Led by Monica I.
We had tried to run this trail a month before but it was raining too hard to attempt it. This day was a rescheduling of that day, and the weather was going to be perfect. We started the trail at noon or so, and we stopped for lunch right away….
Join Us!
If you aren’t a Member or Subscriber, you can’t see all of the content on this site. Get membership information to see why this site is best when you join and log in