We had tried to run this trail a month before but it was raining too hard to attempt it. This day was a rescheduling of that day, and the weather was going to be perfect. We started the trail at noon or so, and we stopped for lunch right away. After lunch, we headed down the trail.

The first part is a mellow and easy trail, and it wasn't long before we turned off of the mellow part and headed downhill on the not-so-mellow part.

The first thing we came to was the Trickle. It looks like a big crack on the way down, but after you've seen the rest of the trail it really doesn't look like much at all. Still, it's fun to play in and almost everyone got in it for some flex shots.

After the tire was changed we came to the second crack. It looks like the bypass around it has been opened now, and it looks pretty used. Still, everyone went through the crack to see if they could get around the tree. Everyone was successful.

We were making excellent time, working our way to the Sluice. No one really worried about the top of the obstacle, but we all went down to check out the bottom. There were lots of logs in the crack, running parallel to it. The hill below the tree seemed to be a bit steeper -- more like a small cliff.

Don started down first, not having any issues at the top. He came around and tried to run his passenger tires in the crack along the logs. The logs just got tangled up in his rims and he ended up pushing one for a few feet. He had to back up so we could get the log out of the way, and then he was fine. It looks like the logs were going to make things worse rather than better.

Matt was next, cruising down to the tree. He got close to it but didn't hit it. He also didn't have any issues with the logs.

Dane had his JK with the hard top on it, and this was the section of trail he was worried about. He didn't need to worry, though. The hard top cleared the tree just fine.

Mike got nice and tippy in the obstacle, but he also didn't hit the tree. He made it look easy.

Roger came down last in his Wrangler Unlimited and got some great flex. He missed the tree by a bit and didn't hit his soft top on it.

The last time we were in the Rapids everything was wet. Now that the trail was dry we hoped that it wouldn't be slippery. We found out that it didn't make a difference. Don tried to stay high but slid right down, getting very close to the rock. It looked like everyone was going to have to work a bit.

Matt was high but came very close to the rock, too. Dane also just barely missed the rock. Mike went very high up on the edge and missed the rock completely. Roger tried for Mike's line but his rear tires slipped down, putting him very sideways in the obstacle. He worked his way through it, though, without hitting anything.

The hole at the bottom of the Rapids was still huge, but filled with logs. We drove over the logs without a problem.

The Spillway was just past the Rapids and everyone got out to look and slide around on the obstacle. Everyone decided to come down it. That's when we noticed that a group of Land Rovers was in front of us. We chatted with them for a bit and they all seemed to be doing fine.

We went back up to the Spillway and Don found a great line down it, barely lifting his tire in the air. It looked like he may have been a bit disappointed to not get a big wheel stand, but at least he was down and safe.

Matt was next, coming through it pretty quickly. He got a great wheel stand, lifting his rear driver tire in the air. He rolled through it with a big smile.

Dane was next, hoping for another good wheel stand. He had his TJ in the obstacle last year and got a lot of air. The JK just didn't get the same amount of air, though. It did flex nicely, but he stayed pretty safe through the whole thing.

Mike hit the Spillway next, getting a pretty big wheel stand. It seemed like he was very close to going over, but he went extremely slowly so he wouldn't tip. It was slow to watch, but he came through without an issue.

Roger brought up the rear and we all thought that his additional wheelbase would make things easier for him. He got the same wheel stand that the others did, but then his Jeep jerked just a tiny bit when the engine braking caught. It was all he needed and the Jeep slowly flopped over onto its nose and side.

It seemed to be pretty close to going over even more, but his front bumper dug into the soft ground and stopped him. He had to sit there and stare at the ground on the steep hill in front of him and below him as everyone scrambled to get him down.

Mike came up the bypass and quickly hooked up a tree strap and snatch block to a tree. Roger was soon hooked up and safe, and we all breathed a sigh of relief. Everyone had to push while Mike winched and Roger was once again back on his tires.

Most of the damage was probably done in the recovery as he slid down the rock. He crushed his windshield frame and passenger door, and broke the passenger door window. He also destroyed both fender flares and his rear soft top window. He got a small oil leak that started in the recovery, but after waiting for a bit the Jeep started right up with no smoke.

No one was hurt and the Jeep would be driveable, so it could have gone much worse. Still, it's always unfortunate to see someone get into that position. Mike noted that even a flop like that wasn't enough to take the "Trail Damage of the Year" prize away from Don (he rolled his Jeep earlier in the year).

It took awhile to separate the broken glass from all of the little pebbles on the obstacle. Then we noticed that there was broken glass ahead of where Roger was, and that explained why there was so much of it. We filled two trash bags with glass, rocks and oily dirt.

We started back down the trail again and soon caught up with the Land Rovers. They had a bent drag link and they were stuck, mere yards from the bottom of the trail at the meadow. We hung out for a bit to see what would happen, but it looked like it would be a better idea for us to turn around. We said our goodbyes to the group and turned around. Turning around took awhile in the huge crack.

We came to the Spillway and no one was up for going up it (is that even possible?). Mike drove up it for the second time that day without an issue. Roger tried next but the dirt was so loose that he couldn't get up it. It was still "Roger Day" so he had to winch himself up the hill.

Dane tried the slow approach, but then backed down and gunned it to the top. Matt tried the same speed but then found that his rear locker wasn't working. He'd need to winch himself up. When he tried winching, it only killed his Jeep. Now he was stuck in the middle of the hill, so he had to get winched up by someone else.

We worked our way up the hill, slipping and sliding in spots but doing okay. The Sluice was fine on the way up, and so were the Rapids. We all took the bypass around the second crack.

Roger was working his way up a smaller hill when his front tire just came right off the rim. It was the tire that had the weight of his vehicle on it when he was on his nose in the Spillway, and rocks had gotten in the bead. Unfortunately, he was in a bad place to change a tire and he had already used his spare earlier in the day.

He tied himself to Mike's Jeep and used his winch to keep him on the hill from the side, and then worked on jacking up the Jeep. Naturally it wouldn't cooperate, so it took some shoveling. He used Mike's spare tire, and it wasn't long before we were going again. During this time, the sun had finally gone down.

We soon got to the top and we were finally back up on Ice Cave Creek Road. What a crazy trip! Even though this trail is nutty we still had a good time (well, Roger is on the fence about that). 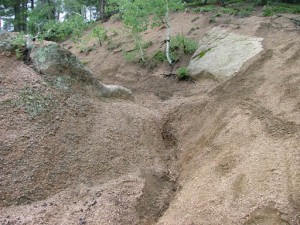 Led by Monica I.
We had tried Winding Stairs Road the weekend before, but it was too late and too rainy so we turned around just before the Sluice. This weekend we went back to Rampart Range Road so we could finally complete Winding Stairs Road. It ended up being even more fun and…
Join Us!
If you aren’t a Member or Subscriber, you can’t see all of the content on this site. Get membership information to see why this site is best when you join and log in