We'd done Weston Pass before, but this was almost like the first time we'd ever seen it. The first time it was raining and dark, so we did it quickly. The second time it was completely dark so we didn't see much. This time, the sun was out and the weather was perfect.

We started on the Fairplay side and ran it from east to west, which was also a first. The views were spectacular on both sides. The trail was mellow and easy on the east side as we climbed to the pass, and luckily we were in a wide spot when two trucks came barreling through.

It wasn't long before we were at the pass. Everyone parked and got out to take pictures. It was windy and fairly chilly, but still not too bad considering it was mid-October. There wasn't any snow at all.

We soon headed down the other side and passed a Toyota Matrix negotiating the rocks on a rough hill. They let us pass, and we were very surprised to see that they came off the trail pretty soon after we did. Hopefully it was a rental car.

We didn't see any other people, which was odd but nice. When we got to the far end next to the highway, we got out to stretch our legs. Julie was feeling and hearing a weird banging noise, but she couldn't find anything wrong. After we were all done enjoying the scenery provided by Mount Elbert and Mount Massive we headed south to Lost Canyon.

This trail is really nice in the daytime. It's almost like a new favorite.

Use the arrows or dots to flip through the previews of the other reports for Weston Pass. Click one of them to read more and see all of the photos from that day. 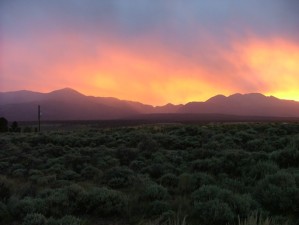 Led by Monica I.
We had already done Mount Bross, Mosquito Pass and Birdseye Gulch, and we were planning on Weston Pass, too. Birdseye Gulch took longer than we expected, and it was almost 8PM when we were getting gas in Leadville. We knew we’d be doing it in the dark, eventually, but we…
Join Us!
If you aren’t a Member or Subscriber, you can’t see all of the content on this site. Get membership information to see why this site is best when you join and log in