It was our first time to run this trail, even though we had all passed the trailhead more than a few times. We had always wondered what was there, and it was time to find out.

We aired down just past the railroad tracks and then backtracked back to the trailhead. There is no room at all to air down anywhere near the trailhead as it starts as a pretty narrow trail. We weaved around houses and official buildings as the trail worked its way through the trees.

The aspen trees were still yellow, though there were spots that looked like they were in the wind a lot and they had already lost their leaves. The sky was blue and the weather was gorgeous.

The weather was a nice surprise to all of us. At first, a cold front was predicted and we had expected snow (or at least some freezing drizzle). Then, at the last minute, the cold front was delayed a day and we ended up with fantastic fall weather. Everyone had their soft tops down and windows out, enjoying the last bit of the sun for the season.

We opted not to take the shortcut, continuing along straight at the "Y" in the road. The trail got more narrow, and you could tell that this part of the trail didn't get nearly as much traffic. We especially enjoyed this part. There were pine needles covering everything, and a few places were also covered in yellow aspen leaves. It was really beautiful.

We took the little spur up to the dead end, just to see it. It didn't last long, and the trees got very tight at the end.

After we came down, we crossed the shallow Beaver Creek and headed back up. We soon found ourselves in a gorgeous meadow, surrounded by yellow aspens and fall colors. It was definitely worth it to not take the shortcut.

We soon worked our way back out to where the shortcut intersected at the Lone Star Mine. We snapped a few pictures in the sun and respectfully stayed off of the private property.

Continuing along, it wasn't long at all before we came to the hiking trailhead to get to the Champion Mill. We were definitely going to go see it, so we parked the Jeeps and headed out. It was a very short and easy hike, and soon we were at the mill and the mine.

The Champion Mill was really cool! The 10-stamp press was still standing, and it was the first one we'd seen like that. We had all seen remnants of them on the ground at other mill sites, but this was definitely unique.

You could see across the pine trees to the next range of mountains, with a little snow on them. It was still so gorgeous. We killed a bit of time wandering around, and finally we realized we should go.

We had lunch back at the Jeeps, enjoying the sunshine. Everyone was happy, and no one really wanted to get back behind the wheel and go. Eventually, though, it was time to leave.

The rest of the trail was mellow. The campsites were really very nice, and everyone got ideas for camping next season. It would really be a great place to camp, though the sites are first come, first served.

When we got out to the highway we made the short trip over to Eldora and the start of the Eldorado Mountain trail. The day couldn't get much better. 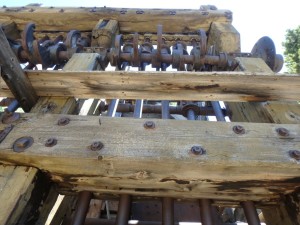 Led by Monica I.
Every once in a while we have “one of those days” where it seems like nothing goes as planned.  A few of us camped at the Kelly Dahl campground, and then we all met in Nederland.  We started out with five Jeeps and ended up with only three as two…
Join Us!
If you aren’t a Member or Subscriber, you can’t see all of the content on this site. Get membership information to see why this site is best when you join and log in