The last time we were on Warden Gulch it was pretty snowy. We got to the base of yet another snowy hill and decided to call it quits. So we hadn't seen the last bit of the trail yet, but it looked like 2009 was going to be our year.

We had fun splashing through the creek crossings, with steam rising from everyone's Jeeps in the chilly air. The sunshine had left us but it was still nice. We were soon heading up the hill climb.

It's a fun and rocky climb to the top, and everyone enjoyed it. You could make it as easy or as difficult as you wanted, though it never got really easy. There was a rock standing on end and Bob S. checked his clearance by straddling it and not knocking it over.

It wasn't long at all before we were at the top. You could see the mine and the narrow roads accessing it, but it didn't look big enough to hold all of us. Roger and Bob S. took each access road to do some exploring while the rest of us watched from the flat area. It was windy, and we also watched the clouds coming in, bringing horizontal rain. It drove us all back into our vehicles, and soon we were heading back down to get out of the weather.

On the way down, everyone straddled the same rock to test their clearance. Roger was last and he thinks he knocked it over. It was our special rock for the day, apparently.

When we got back down to the trailhead we splashed through the water again. Bob R. left us at that point to head back to town while the rest of us continued on to complete Peru Creek and the other trails in the area. We'll have to come back when the weather is better so we can do some exploring. 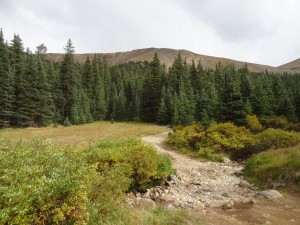