Trail Run on March 17, 2019
Report and photos by Matt K., Trail Leader
View trail information for Top of the World

We ran Top Of The World on the second day of the Moab trip. We aired down by the Dewey Bridge. The first half of the trail was easy going.

Just after the parking area by the start of the Dolores River overlook the trail got very rocky and hilly. We had to go up hill climbs and climb up and over many ledges along the way.

We headed up the right side at the intersection. That is when Niko started to have a drive shaft vibration problem. We decided to leave the front drive shaft on until the end of the trail, hoping for the best.

Top Of The World did have some snow on the trail. It made fun to drive through but it wasn't enough snow to make anything hard. It was just mostly wet.

Soon, we made it to end of Top Of The World. We parked in the parking area to have lunch and take pictures at the overlook.

After lunch, we went down the other side of the trail. It was more difficult, and covered in snow. The left side would have been very hard to go up this time of the year. We were glad we did the right side on the way up.

Soon we had made it back to Dewey Bridge area, and that is were we removed Niko's front drive shaft and aired back up. It was a fun day. 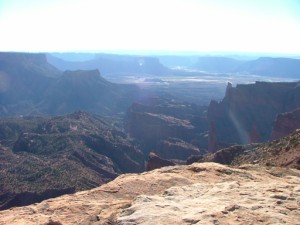 Led by Monica I.
The views were incredible from the end of this trail, and we spent a couple of hours just exploring and sightseeing. We ran Onion Creek and Rose Garden Hill first, but ended up spending most of our time on Top of the World. The sign was a little ways off…
Join Us!
If you aren’t a Member or Subscriber, you can’t see all of the content on this site. Get membership information to see why this site is best when you join and log in