Trail Run on March 22, 2006
Report and photos by Mike S., Trail Leader
View trail information for Top of the World

We started out from Denver at 6:30 AM anxious to get to Moab and hit the trails. We got to the parking area at the Dewey Bridge right at 11:30 in spite of the nasty road conditions through the tunnel and over Vail Pass on I-70. After a brief stop to air down and disconnect, we headed for the trail. We passed a cowboy on his horse on Entrada Bluffs Road, one of only two people we would see on the trail. The other was a runner and her dog returning from the overlook.

The route finding was easy and there were no real obstacles of note. Once we reached a little higher elevation, there were patches of snow on the trail and signs of only one vehicle on the trail since it snowed. Closer to the top, the snow was continuous and about 2-3 inches deep. We reached the top without incident and posed for the obligatory photos on the overlook. We didn't drive out as far as you could -- the crack in the rock was a little too wide for our liking!

We continued around the loop from the top, and were driving in virgin snow as the other vehicle had returned out the same way it had come in. We headed back down to the parking area to air up and reconnect. The trail was a great warm up for what was to come for the rest of this trip to Moab! 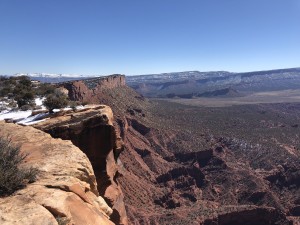