We stopped for only a little while in Swandyke, to check out the buried truck. It has been a year since we first saw it, and we still don't know its history. Like last year, it was driving us crazy wondering how it got there. It's definitely one of the weirdest things we've seen out on the trail.

It was snowing, but it wasn't really sticking until we started to get to about timberline. When we came out of the trees we could see that the trail and all of the mountains were about half-covered in snow. It was still snowing, and snowing really hard. It made everything a bit slick and wet, but because only half of any given section was snowy it wasn't too bad.

The top part of the middle fork is pretty steep in places, but we weren't really sliding around much, if at all. It would have been very bad on street tires, though.

We finally got to the top and breathed a sigh of relief. We worked our way over to the top of Radical Hill, and we met up with three Jeeps coming the other way. We talked with them briefly and they said they had run Red Cone and Radical Hill and that it wasn't too bad. They were on their way to S.O.B. Hill, and we confirmed that they were headed in the right direction.

When we could finally see Red Cone we were all very happy that we hadn't been on it on that day. It looked really slick and scary.

We all decided that we're not quite ready for winter! We headed off to Radical Hill and hoped it wouldn't be too snowy. 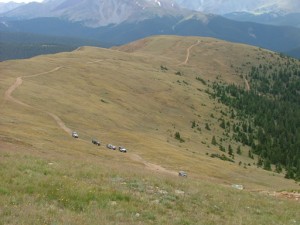