It was frustrating for a good portion of the day as we explored nearly every spur on the trail, following it until it dead ended. We missed an important turn, and instead worked our way across the area to Area BFE instead of around it. Still, we had a good time finding our way.

We found the trailhead easily enough, and it was good to have a large area to air down and get ready. After we started, the first thing we did was miss the campsite. We went up the hill and it didn't look very well used when we got to the top, so we turned around and went back down.

The Big Ugly hill after the campsite was a blast, and everyone had a good time clawing their way to the top.

Once we got to the next ridge we could see trails across the way but we had a hard time figuring out how to get to them. It turned out they were the wrong trails anyway, but they were still fun. We had to have gone down at least 5 spurs that ended at a fence or just ended.

We were following the tracks of some big 4x4 vehicles, but it turned out they were lost too. They went down every spur and turned around, just like we did.

Finally we got over the next ridge and down into a valley. There we found an old trail that was closed. It hadn't been used in awhile, but it looked like it was a fun one. We thought it may have been Lower Helldorado (that trail was closed in late 2003) but it turned out that wasn't it. We still have no idea what it was. We had lunch and enjoyed the sunshine.

The climb out of the ravine was a blast, though. It started out as a very rocky series of ledges, and near the top there was a ledge that had a deep hole at the start. Monica left a lot of rubber on it, but everyone else who followed did fine. Until Ladd.

Ladd got a little sideways on it and managed to get extremely tippy, with his back tire in the hole. He held on with both hands as everyone got him back down to earth. With a bunch of people on a strap attached to his bumper and Bob hanging on like a monkey, Ladd slowly backed off of it to safety.

We kept going, coming down a huge hill as a couple of nicely built Cherokees came down from the other side. It turns out these were the two we had been following, and it was their first time there.

At the bottom of the ravine was the Helldorado trail (formerly Upper Helldorado). We walked a bit of it, amazed that people could do it. It was much too big for our Jeeps.

The Cherokees were broken, so we loaned them some tools and hung around for a bit. When they were done, we climbed up out of the ravine and found ourselves in the main part Area BFE, where we played some more.

Hopefully the next time on this trail will be easier, and we'll be able to see all of it. 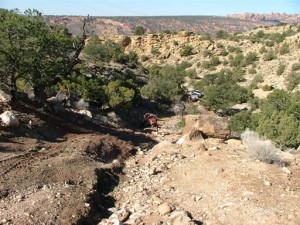 Led by Monica I.
We couldn’t find the trail last year, so this year we were even more prepared. We had lots of maps and more information, but it was still difficult to find the trail at times. Though it is a frustrating trail, the Big Ugly obstacle makes it all worth it. We…
Join Us!
If you aren’t a Member or Subscriber, you can’t see all of the content on this site. Get membership information to see why this site is best when you join and log in