We couldn't find the trail last year, so this year we were even more prepared. We had lots of maps and more information, but it was still difficult to find the trail at times. Though it is a frustrating trail, the Big Ugly obstacle makes it all worth it.

We started out just fine and soon found Big Ugly. We had our GPS track from the year before so we knew the beginning of the trail.

Monica started up and found that it was loose and rocky. It took some momentum at times, but she made it up to the middle where it levels out before starting up again. We watched each other climb the first part and took pictures, but then the second half of the hill was spent a bit more alone as we all worked on the hill.

As each person came through it got more difficult, with sand and mud on the rocks from the person before. We had Kendall in his truck for awhile, but then he had to give up on it and back down. It was a lot of work for all of us, but everyone enjoyed it a lot.

We got up to the ridge and Monica got out to hike the old trail. She had read that the sign that marks it as closed may not actually be accurate, so she wanted to verify that. She walked all the way down to the bottom and found another gate with more signs. It looks like the trail used to get a lot of use but it hasn't for a few years. It is shown as part of the trail on older maps, but it is now closed.

We continued on over the ridge, then had lunch in the sun at the bottom while we explored the area. When we got to the larger road we turned left to check out the other half of Strike Ravine.

We headed for the big trans lines but ended up turning too soon. The trail soon dead-ended so we came back to the road. We finally found our turn and headed downhill.

The trail was pretty mellow as it headed down into a wash, where it got pretty cool. The sides were very steep as we weaved our way through it. There was a tippy section but it wasn't too bad.

Soon we were back out at Area BFE where we headed back out to the highway. We wanted to do Flat Iron Mesa and our light was already fading, so we didn't take the time to play.

Strike Ravine is a frustrating trail, but it should be easy to find with a GPS and the track provided on this site. Otherwise it's almost impossible to find. 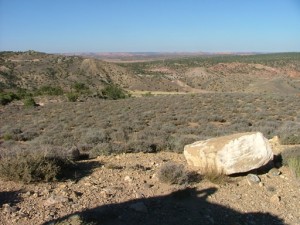 Led by Monica I.
It was frustrating for a good portion of the day as we explored nearly every spur on the trail, following it until it dead ended. We missed an important turn, and instead worked our way across the area to Area BFE instead of around it. Still, we had a good…
Join Us!
If you aren’t a Member or Subscriber, you can’t see all of the content on this site. Get membership information to see why this site is best when you join and log in