We just finished the end of Michigan River and when we got to the major intersection there were some people on dirt bikes replacing the signs that closed Baker Pass. It turned out that they were with the state parks and it was very handy to run into them. Baker Pass and Owl Mountain were both closed because of wash-outs. What a bummer.

After finishing our chat with the state parks people we easily found our way to Silver Creek. The views were really nice at the start. The big bridge crossed the creek and it looked pretty deep. We were told that the creek crossing was pretty deep but that we might get through it. Challenge accepted!

The first creek crossing was definitely deep and wide. Austin went through first because he had the biggest tires of our group. We didn't need to worry, though. The creek wasn't too deep at all and we all had a good time going through it.

The trees on this trail were very, very tight in most places. We could see that someone had recently done a lot of trimming and they had moved some deadfall in places. Even with all of that work we still had to go slow and deal with the new scratches and scrapes.

At one point a tree smacked into Monica's Jeep and covered her in dirt. She got out and brushed it off. It was about a half-inch deep in her driver's seat. Walt was smart and rolled up his windows but everyone else got covered in dirt by that tree.

We all got smacked in the head at least once by a tree we didn't see. There were also lots of muddy sections though nothing was particularly slick.

The second creek crossing looked like a miniature whitewater rafting area. It was going fast. Monica got swept into the big rock in the middle but managed to back up and pick a different line. No one else had any issues. After the creek crossing Monica's Jeep was steaming and draining water like crazy. At first, we all thought it was her radiator but that wasn't it. Something in the engine compartment really holds a lot of water.

We kept on going and for a little while the trees were very, very tight. There was a little bit of snow in a few places but someone had already bashed through it. When we got to the meadow at the end we saw a vehicle parked up there with two hikers in it. They were just about to start the hiking trail and they told us it took them a while to cut the trees out of the trail. It was them! How handy to hit the trail just after they did.

We stayed in the meadow for a little while because it was so gorgeous. The mountains surrounding us had bits of snow on them and it was a nice contrast to how green everything was. We could have hung out there for a long time, especially because we knew we had to get back through all of those trees.

The creek crossings were fun on the way back out and it didn't take us long. We discussed what we'd do with the rest of our day. It was about dinner time and everyone but Austin still had to check into hotels so we decided to have dinner at Drifters.

After checking into hotels in Walden, Mike, Monica and Walt went to try to find the East Sand Hills. We could see them but no matter which road we picked it ended at a ranch or at a gate. There were signs marking our route as an Auto Tour but it never ended up going anywhere while we were on it.

It rained a bit and we had a double rainbow to enjoy as the sun set. Even though we couldn't get to the East Sand Hills we enjoyed the scenery. We found out later that you can only drive to within three miles of the East Sand Hills so our mission was a failed one. Still, it's good to be out driving around with friends.

It was a great day and we looked forward to the rest of the weekend. 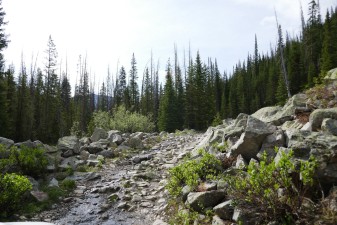 Led by Monica I.
We were staying at the Ranger Lakes Campground nearby, so we had all day to do trails just south of the campground off of Highway 14.  We started with Silver Creek, a trail we’d seen before.  The last time, it was overgrown and crowded in the trees, but this time…
Join Us!
If you aren’t a Member or Subscriber, you can’t see all of the content on this site. Get membership information to see why this site is best when you join and log in