We were staying at the Ranger Lakes Campground nearby, so we had all day to do trails just south of the campground off of Highway 14.  We started with Silver Creek, a trail we'd seen before.  The last time, it was overgrown and crowded in the trees, but this time it was more open.  We thought it might have something to do with more offroading.

It was a bit overcast at the start of our day, but the temperatures were cool.  There were marshy areas next to the trail, adding to the mosquitoes already around us.  We stopped just before the first creek crossing to put on bug repellent, and Mike stuck the front of his Jeep into the pipe there.  We saw a trail going through it to the other side, but it was too small for a vehicle.  ATVs would have no problem getting through it.

The creek was right near the pipe, and we went through a couple times.  Sometimes we do weird things to get videos and photos of our adventures.

After that creek crossing we went into the trees.  There were quite a few dead trees mixed in with the green ones, but we didn't worry about it too much because everything was soggy from rains.  It made the rocky parts more fun because they were muddy.  There was even a nice spot where the rocks were a bit challenging.

The trail would be a mud puddle followed by rocks, and then back to a mud puddle.  We saw a deer right next to the trail, and then it was back into the mud puddles.  None of them gave us any trouble.

We saw small patches of snow near the trail, but the trail itself was clear already.  We splashed through the second creek crossing and then enjoyed the hill climb of rocks.  Then the trail came out of the trees to run along a gorgeous meadow.  It soon ended at the hiking trail.

We got out to explore, but there were too many mosquitoes to hang out for long.  After a quick reapplication of bug spray, we turned around and headed back out.  On the way down, we saw a moose and her calf, but they were too quick to get with the camera.  We were soon back to the trailhead and off to our next trail. 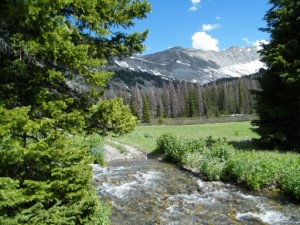 Led by Monica I.
We just finished the end of Michigan River and when we got to the major intersection there were some people on dirt bikes replacing the signs that closed Baker Pass. It turned out that they were with the state parks and it was very handy to run into them. Baker…
Join Us!
If you aren’t a Member or Subscriber, you can’t see all of the content on this site. Get membership information to see why this site is best when you join and log in