We came up from the south end of Rampart Range Road after having lunch at Balanced Rock in the Garden of the Gods park. Ladd realized that he wasn't going to have enough time to do this trail and get back home on schedule, so he ended up taking Rampart Range Road all the way up to the north end instead.

The rest of us did the trail. The end of this trail ended up being quite a bit more challenging than we thought it was going to be, which was a nice surprise.

It was pretty rainy when we started, and it never really got much better. We passed three Cherokees on their way out just as we were getting started, and then we never saw anyone else.

There is another, smaller hiking trail but we didn't follow that one. We took the wider one on the other side of the fence. We saw an outcropping of rocks to the right of the trail fairly early on, but the views weren't great so we continued on. Not too much further down the trail we found another group of rocks and we climbed up those to get a great view of the flatland below. You could see for miles, and the weather had cleared up for a bit, so we were really treated to some great scenery.

We weren't gone long, so soon we were back in our vehicles. We took 313 on the way back, and it was cool how different it was. It was really buried in the trees and it looked like no one had been on it in awhile.

We made the sharp right turn at the "Y" intersection to explore the left-most spur. It was really mellow for awhile, but then it started getting a bit rougher. We really enjoyed weaving around through the rocks -- that was probably the best part.

The trees kept getting tighter and tighter and we were wondering how far the trail would take us. We stopped in the pouring rain to look at some maps, and that's when we noticed that we could only go about 20 feet further anyway. The trees eventually got so close that we could no longer fit through.

It looked like an ATV trail that just kept going, but we didn't walk it very far. We realized we had to turn around, so we did. It took us awhile, though. We had 10 vehicles and not very much room, so there was a lot of backing up and getting creative. It looked like other people had to do the same thing before us.

We got back to the "Y" and then back to the trailhead. At that point, Matt decided to head out instead of continuing on to more trails. We said our goodbyes and then started up Rampart Range Road to some more trails.

Use the arrows or dots to flip through the previews of the other reports for Schubarth Road. Click one of them to read more and see all of the photos from that day. 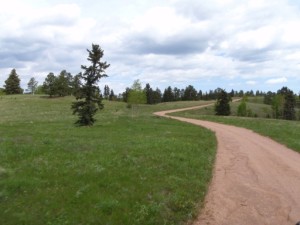 Led by Matt K.
We met at the Balanced Rock parking area inside the Garden of the Gods after waiting 30 to 40 minutes to get into the park. They were having a 10K run that we weren’t aware of. When we were working on getting there the sun was out, but the clouds…
Join Us!
If you aren’t a Member or Subscriber, you can’t see all of the content on this site. Get membership information to see why this site is best when you join and log in