Trail Run on May 20, 2012
Report and photos by Monica I., Trail Leader
View trail information for Scharf Mesa

We had reports that Rock Block was moved off of the trail, so we had to check it out. The rock blocked our way back in 2008, so we had our fingers crossed this time. Hopefully the trail would be continuous all the way to DS Road. We had been lucky so far, but would our luck continue?

We found the trail easily enough. It was getting close to lunch time, and we decided to get up on top of the mesa to eat, just to get out of the heat and the bugs. The trail was nice and mellow, and there weren't any fresh tracks in front of us from vehicles. It was promising.

The hill before Rock Slide was definitely different. It had seen much more traffic since we were there last, and the uphill portion was easy and nice. The last bit was rocky but much easier. We used it as an opportunity to pose for flexy pictures in the scenery.

After the Rock Slide we stopped at a high spot for lunch. We walked our chairs out to the edge so we had a good view of the river below us. You could just hear the water rushing, and it was nice. Well, it was nice for a minute or two. The bugs soon found us, so everyone got up and started walking around. The chairs sat empty with a nice view, and we ate quickly. It wasn't one of our favorite lunch spots, that's for sure.

We soon got back on the trail, following it easily. It was almost time to come up on Rock Block, and we were all wishing for the best. It was crazy to find the rock off of the trail completely, slid sideways and just off of the trail. Who moved the rock, and how did they move it? It must have been quite the undertaking. We were thankful to whoever moved it, and we drove by without any problems at all. We left just as a couple ATVs came up behind us. They could get around us pretty easily, so we let them go by.

When we got to the slightly confusing intersection, we saw the ATVs turn left. We continued straight, and we had the rest of the trail to ourselves. The trail became much less used, but it was much easier to find this time. In fact, the confusing spot was much easier to navigate with a clear trail.

We stopped for a little break, and followed a little trail made by erosion to an edge. There, Julie found a little natural bridge made by rocks. It was very small, but it was a cool find. We'll have to stop here each time we pass by so we can visit the natural wonder.

We made good time on the way out, and it was easy. It wasn't long before we intersected with DS Road. This time, instead of going north on DS Road we turned south to catch Sheep Creek. We'd done the first part before, but this time we were headed all the way to Gateway. Thank you to whoever moved Rock Block! 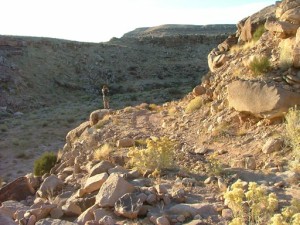 Led by Monica I.
We did this trail when Rock Block cut it into two halves. This report includes the two separate trail reports. Scharf Mesa East The plan was to finish our big loop through the Dolores Triangle by taking Scharf Mesa back to the Dolores River trail. Of course, we didn’t know…
Join Us!
If you aren’t a Member or Subscriber, you can’t see all of the content on this site. Get membership information to see why this site is best when you join and log in