We did this trail when Rock Block cut it into two halves. This report includes the two separate trail reports.

The plan was to finish our big loop through the Dolores Triangle by taking Scharf Mesa back to the Dolores River trail. Of course, we didn't know about Rock Block, a rock the size of a truck sitting right in our way that would turn us back.

The trailhead was easy enough to find, especially with it on the GPS. Once we got started, however, we made a lot of wrong turns. Old trails were gone and new spurs had shown up to replace them. After a few false starts we finally found our way over the ridge and onto the mesa.

We all got out and walked around, and finally found the trail after much searching. We all got back in our Jeeps and continued on, but there were hardly any tracks in front of us then.

We came across the slickrock patch and saw the intersection, but correctly guessed an uphill climb. Everything was looking good and we knew we were getting closer and closer to the Dolores River, our ultimate goal.

Then we came around the corner and saw Rock Block. It had fallen from above the trail and it blocked half of the trail next to a drop-off. There was no way we'd fit on the trail in order to get past the rock.

We could see many tracks leading up to it and past it, but those were ATV and dirtbike tracks. Our only option was to turn around.

It looked like a lot of the tracks in the sand didn't know to continue along the slickrock, so they all stayed down in the wash after going down the hill. We went that way very briefly, but the old trail just disappeared into the brush. The tracks before us also turned around and gave up.

So our only option was to go back out the way we came in. It had taken a couple of hours to get to that point, but it was our only choice. But, of course, it was always faster on the way out. In 45 minutes we were back on DS Road.

It was a fun adventure, but it's a frustrating trail. It would definitely be more fun on an ATV or dirtbike, so you could make a loop. But we were glad we found it just the same.

Off to the next trail! Unfortunately, we didn't really have a plan so we broke out some maps.

We were losing our light, but we had to see the rest of Scharf Mesa. We had already done Scharf Mesa East, only to find Rock Block stopping us from getting any further. We knew there were lots of tracks on the other side of the rock, though, so we knew it went through.

The trailhead was easy to find, an uphill climb away from Buckhorn Mesa. It looked like it also might be graded, but that smooth road ended right away. It didn't get much bumpier, though.

The views of the river were very scenic, and we already knew we'd have to come back here again when there was more light, just to see it better. We were enjoying how the trail wound around and up and down to follow the river.

The river turned south and we moved away from it, and the trail got a lot more interesting. It was rocky and washed out in places, keeping us on our toes. At one point, we came down some rocky switchbacks only to find more rocks at the bottom of the ravine. It was already a great time.

We climbed up the next hill, and at the top we found the Rock Slide. It was a nice pile of rocks to finish up the hill climb. We all took our turn climbing up the hill and tackling the obstacle, and everyone enjoyed it. What a blast, and a nice surprise!

After the obstacle, the trail wound its way aross the mesa. We could see our earlier trail on the GPS, working our way to the other side of Rock Block. It wasn't long before we were there.

We all got out, exploring the other side of the big rock. It was odd to see our tracks and footprints in the sand from many hours ago and many miles before. There was still no way around it, though, so we had to turn around.

But no one was too upset about it. We had another good time going down the Rock Slide and through the ravine of rocks. The trail is almost as fun on the way out.

We were back at the trailhead and the light was almost gone, so we finished up the end of Buckhorn Mesa and then finished up Dolores River in the dark. The day involved a lot of exploring and some tense moments, but like Gary says, "if you're in a Jeep and you still have gas, you're not lost!"

We still have so much exploring to do in the Dolores Triangle, but we'll have to save it for another trip. 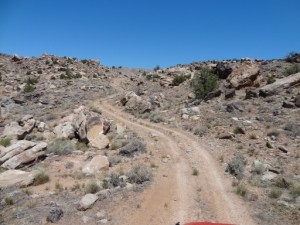 Led by Monica I.
We had reports that Rock Block was moved off of the trail, so we had to check it out. The rock blocked our way back in 2008, so we had our fingers crossed this time. Hopefully the trail would be continuous all the way to DS Road. We had been…
Join Us!
If you aren’t a Member or Subscriber, you can’t see all of the content on this site. Get membership information to see why this site is best when you join and log in