We'd spent the majority of the day exploring Pinhook Valley next to Castle Valley, all the way up to Miners Basin. We were looking forward to getting on Sand Flats Road so we could look down on where we'd been from the top of Porcupine Rim. We started Sand Flats Road on the eastern end on the La Sal Loop Road.

The beginning of the trail is mellow as it pops in and out of the Manti-La Sal National Forest. It didn't take long at all to get to the Castle Valley overlook. When we got there, we found people camping at the end and getting ready for a bike ride. We imagined that they'd see people up here all day, so it might not be the best place to stay.

The overlook was breathtaking. The rim is so steep, long, and straight that it's actually difficult to wrap your head around it. The valleys are so huge, and there is so much to see. Round Mountain doesn't look as big from up there, either.

We could see that we were directly across from where we'd stopped at a gate on Porcupine Ranch not too long before we were at this overlook. We could see that whole trail and most of the Pinhook Valley trail. Though we couldn't see the Miners Basin trail, we could see the patch of yellow aspen trees where we'd taken so many pictures that morning. It was cool to see where we'd been earlier, so we hung out there for a while.

The Porcupine Rim trailhead isn't too far down Sand Flats Road from the overlook, and when we got there we got out to discuss doing the Porcupine 4x4 Trail. It was probably too long to get done before the sun went down, but we had time to do one leg of it. We headed down Porcupine Rim to check it out.

The turn to get onto the trail was tight, so we worked on that. Julie ended up going first and wasn't crazy about the tippy obstacle on that end of the Porcupine 4x4 Trail. We didn't know if the rest of the trail was going to be more of the same, so we decided to find out on another day. We worked our way back out to Sand Flats Road.

The trail is scenic and nice, and we saw lots of people enjoying the recreation area. We also saw emergency responders at the campground, which wasn't good. We hoped everyone was okay, and we kept moving. We made a note of the actual trailhead for the Porcupine 4x4 Trail and enjoyed the rest of the drive.

We had to stop at Baby Lion's Back, of course. We all had a good time going up and over the obstacle on the side of the road. It was our first bit of slickrock, and it's funny how it can be very intimidating when you haven't done those steep hills in a while. It's definitely a good time.

We wrapped up our day and headed into town to grab some dinner. It looked like it was going to be a fantastic stay in Moab. 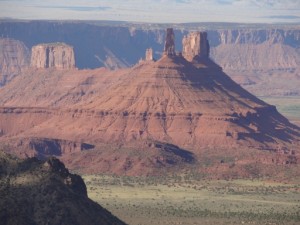 Led by Monica I.
Both of us had been on Sand Flats Road many times to get to the other trails in that area, but neither of us had seen the rest of the trail. We were both happy to go check it out even though we’d aired up already. It was definitely worth…
Join Us!
If you aren’t a Member or Subscriber, you can’t see all of the content on this site. Get membership information to see why this site is best when you join and log in