Both of us had been on Sand Flats Road many times to get to the other trails in that area, but neither of us had seen the rest of the trail. We were both happy to go check it out even though we'd aired up already. It was definitely worth the trip, and we ran it from the far end into town.

The trail was curvier as we got a little lower in elevation, and then we saw the turn for Castle Valley Overlook. We'd both spent lots of time in Castle Valley and we knew how pretty it was, so we took it. The spur was much more difficult than the main trail, but it wasn't too bad. We were surprised to find a pit toilet and multiple sites with picnic tables. It would be a pretty cool place for lunch, but not nearly as cool as the end of the trail.

It was another jaw-dropping moment when we saw the views. The whole valley was stretched out before us. There were a few vantage points that allowed us to see the whole area, and it was amazing. We took a lot of pictures. We also noticed that the trail just kept going, right off of the cliff. If it was dark some seriously bad things could happen.

Julie had biked Porcupine Rim before, and she noted that you could start that trail from this overlook spur. There was a sign noting it was The Whole Enchilada. We could have stayed there all day, but now we wanted Mexican food.

The main trail remained easy as it turned west and headed away from the rim. It was still very scenic as it wound its way along. We came to the trailhead for Porcupine Rim and we both recognized it instantly. We stopped to check out the nice map they had there and noted there was a new trail between Porcupine Rim and Fins & Things that we didn't even know about. Next time!

We found yet another surprise at the Juniper Campground, a nice campsite that we didn't know about. It looked brand new, and no one was there. We drove through it and thought it would be a great place to stay as long as the temperatures weren't too high.

As we worked our way west it was a very familiar area. We'd both been there many times, after all. It was interesting to see Sand Flats Road as a destination instead of a means to an end, and it made it very enjoyable.

When we got to Baby Lion's Back we had to do it for old time's sake. We went up to the top and found a Land Rover up there and a driver unsure about the water at the bottom. He pulled to the side and watched us go down the other side. It wasn't a big deal and you could get around it while staying on the trail, so he also came down. Monica drove through the huge puddle and it wasn't deep at all.

Of course, it was a quick trip back out to town from there. The combination of La Sal Pass, Geyser Pass, and Sand Flats Road was the perfect way to do some scenic touring away from the heat of the day. We wrapped up our fall trip to Moab with big grins and happy memories. 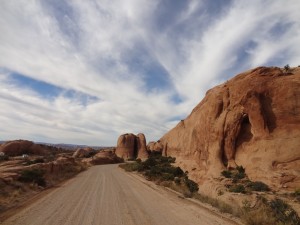 Led by Monica I.
We’d spent the majority of the day exploring Pinhook Valley next to Castle Valley, all the way up to Miners Basin. We were looking forward to getting on Sand Flats Road so we could look down on where we’d been from the top of Porcupine Rim. We started Sand Flats…
Join Us!
If you aren’t a Member or Subscriber, you can’t see all of the content on this site. Get membership information to see why this site is best when you join and log in