Trail Run on May 10, 2008
Report and photos by Monica I., Trail Leader
View trail information for Rule Ridge

We'd already had a full day on the east side of Highway 67, but we thought we'd squeeze another trail in on the west side of the pavement. We spent a few minutes on the highway, and then turned onto Painted Rocks Road to the trailhead for Rule Ridge.

This trail was in the Hayman Fire burn area, so it was a bit depressing at first. Everyone was very quiet, thinking about what had happened. Eventually, though, we were all chatting on the CB like usual.

The trail was very easy as we moved into green trees. There was one spot with a small ditch running across the trail that might give a low-clearance SUV some issues, but otherwise it was really mellow.

We enjoyed the scenery, passing through meadows and wooded areas. We had plans for a short diversion, though, and that might offer some excitement.

We turned off of the main trail at forest service road 357.B that was marked as a loop. We weren't going to loop all the way around 357.B, though. We were going to half of that loop and finish up on 357.A.

It started out much narrower than the main trail, but not any tougher. Then we came out on a ridge and the trail had a couple of options as it turned left and headed down a very steep hill.

Monica got out and walked down the hill to check out the beginning of it. There was a forest service sign with just an arrow pointing down the steeper hill, so she took that one. Then she took a short portion that connected her to the other one, anyway. At that point she got out again to check out the rest of the huge hill.

The bottom path turned out to be an ATV bypass, very skinny, very tippy, and included a place that went between two trees. It looked like we might not fit through there, so Monica needed to back up and get back on the other portion of the trail. With Steve B's help, she got up the steep portion and back where she was supposed to be.

The rest of the hill had a huge crack running along it, but it was easy enough to straddle. Once at the bottom, Monica turned right to stay with the trail (and stay out of the water).

After all of that time and drama, the others had it pretty easy. Everyone came down the first big hill and then turned to do the portion with the crack in it. No one had any issues and everyone had a good time.

We went around the corner and found 357.A, which we followed. It was very skinny in places, but no one had any concerns. It was much easier than 357.B but it was still fun.

We were glad that we had done the loop in that direction. 357.B uphill would have been difficult without knowing where to go. We'll have to try it uphill next time.

We finished up the rest of the trail and aired up at the big parking area at the end of the trail. We made it to Woodland Park for Mexican food before the sun went down, which is rare for us. We had a fantastic dinner and Todd got to wear a sombrero as the staff sang Happy Birthday to him. I think he had a good birthday!

We managed to hit five new trails in one day without getting lost. That has to be some kind of record. What a great day. 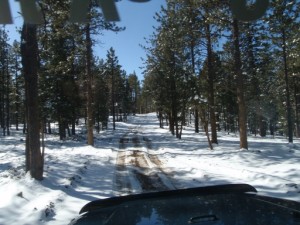 Led by Matt K.
It was a nice, sunny day as we started the trail, and it stayed that way all day. The area had a snow storm come through two days before, but the snow on this trail was not too deep. The trail was fairly easy and no one had any trouble…
Join Us!
If you aren’t a Member or Subscriber, you can’t see all of the content on this site. Get membership information to see why this site is best when you join and log in