We ran this trail on our way to Moab, so we ended up running the trail in the opposite direction. We left Denver early (perhaps the first time ever for a TrailDamage run) and we got to the trailhead at Dewey Bridge at 11:30 AM. We quickly aired down and disconnected, anticipating the first trail for our spring 2007 visit.

Route finding was very easy since Roger had a new Garmin GPS with a color screen. It was a good thing too, since Mike's GPS had mysteriously lost the file that included all of the detailed topo information for the Moab area.

We weren't on the trail for very long before Mike heard a noise and stopped to investigate. It turned out to be a U-joint in the front driveshaft that was going bad. Since it wasn't really bad yet, he was only able to hear it during deceleration and even then not all the time. He decided to drive on. The noise would come and go, but the U-joint lasted the entire stay in Moab and didn't start to sound really bad until we hit heavy traffic at the Eisenhower Tunnel on the way home.

We made one side trip out to the Dolores River Overlook. It was a nice view, but not a "must see" as far as we were concerned.

After the side trip, we reached the top of Rose Garden Hill and scoped it out. It wasn't bad, although Roger and Mike both would prefer going up an obstacle than down one. Mike went down first and found a good rock to flex out his new suspension and 33-inch tires. Sweet!

We moved pretty quickly because there were only two of us, and we were at the end of the trail by mid-afternoon. From there, we ran the Onion Creek Trail out to Highway 128 (we didn't take any pictures, though). 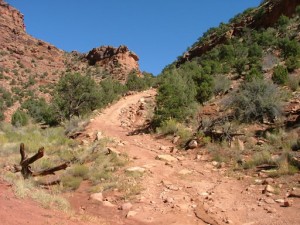 Led by Monica I.
We ran this trail after Onion Creek and before Top of the World. The Charles Wells book says Rose Garden Hill is a difficult trail, with the hill in the middle, so we were excited to try it. It turned out to be fairly easy for Jeep Wranglers, but the…
Join Us!
If you aren’t a Member or Subscriber, you can’t see all of the content on this site. Get membership information to see why this site is best when you join and log in