We ran this trail after Onion Creek and before Top of the World. The Charles Wells book says Rose Garden Hill is a difficult trail, with the hill in the middle, so we were excited to try it. It turned out to be fairly easy for Jeep Wranglers, but the bicycles and dirt bikes we saw on it had a very challenging time on it.

There was a big mud puddle right at the start of the trail. We had really tried to keep the majority of the mud off of us on Onion Creek with all of the water crossings, but then we finally gave up and just had fun in the puddle. Eric got extremely muddy and his Jeep was red instead of green for the rest of our stay in Moab.

The trail had a few rocky sections on the way down into the canyon, and then we finally got to the base of the hill. It was a good time to stop for lunch, in a nice flat area with lots of room to park. Some dirt bikers were walking the hill and had decided not to try to climb it. We talked with them for awhile as we ate our lunch.

Some bicycles were at the top and we could just barely see them. We started up, one at a time, and found it to be a fun hill but not as difficult as we'd hoped. The bicyclists were impressed, though.

Then we watched the bikes go down and one of the riders went over her handlebars pretty violently. The hill gave them all a big challenge, and it was cool to watch.

Then we were off again, and the trail was mellow again. There were some great views of the Richardson Ampitheater, the big valley near the trail.

When we got to the first major intersection, the Top of the World trailhead was on our left. We took that and came back later to finish the rest of the Rose Garden Hill trail. 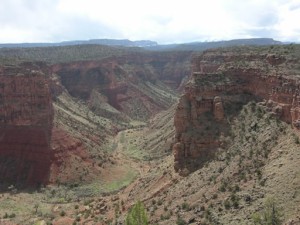 Led by Mike S.
We ran this trail on our way to Moab, so we ended up running the trail in the opposite direction. We left Denver early (perhaps the first time ever for a TrailDamage run) and we got to the trailhead at Dewey Bridge at 11:30 AM. We quickly aired down and…
Join Us!
If you aren’t a Member or Subscriber, you can’t see all of the content on this site. Get membership information to see why this site is best when you join and log in