Trail Run on May 14, 2018
Report and photos by Monica I., Trail Leader
View trail information for Red Canyon Ridge

Sometimes a trail really sneaks up on us, even with the GPS coordinates.  Moonshine Arch jumped out of nowhere that morning, and this time we were really taken by surprise.  We were going slowly along Highway 191 because we knew it was coming up, but still we bunched up at the trailhead while we all figured out how to quickly get off of the pavement and into 4-wheel drive.  The trail started immediately, and we were instantly heading up a huge, steep hill.

We obviously needed to air down, but the trail stayed steep and narrow for a long time, it seemed.  When it finally leveled off a bit, we pulled to the side where we could to air down.  Luckily, we didn't see anyone else on the trail.  This was definitely a hidden gem.

We kept thinking we'd seen the top of the hill climb, but it just kept going as we followed the power lines.  We climbed over the substation, then over the river at the bottom of the canyon.  We could see everything from our vantage point, and it was beautiful.  It was one of those trails where you could make a mistake and fall off of a trail because the scenery is so distracting.  No one fell off, though.

We were enjoying the trail even after the hill climb ended.  It had a few ledges here and there, and it had a lot of beautiful scenery.

It wasn't long before we were heading down a steep hill, seemingly one that would take us over the edge and into the canyon below.  Then it finally turned and we found ourselves at the end of the trail at a gate.  There were signs warning us of the dead end, so we were expecting it.  It was a bummer, though, and we could see the little-used trail across the creek.

We took a short break, and then turned around to head back.  It was a blast even on the way out -- maybe even better because the views on the way down were outstanding and the hill was a blast.  We could see the visitor center, and knew that was a good place to regroup.  Each one of us carefully popped out onto the highway to cross it and head for the parking lot.  Mike discovered he'd destroyed and lost one of his wheel's center caps over the course of the trail.

Unfortunately, we were just a bit too late for the visitor center and it was closed.  We aired up and headed off to the Red Canyon Visitor Center.  We stopped at what appeared to be the only restaurant along the way, but it was closed.  We even stopped at a few campgrounds to check things out.  They were all amazing.

The Red Canyon Visitor Center was deserted and just as closed as everything else, but we were able to walk out to the rim and look down on the Green River.  It was awe inspiring, and we were all very glad we took the time to go out there.  After checking everything out, we headed back to the Split Mountain Campground we were calling home for the long weekend, knowing that someday we'd spend our week at Flaming Gorge.  What an awesome day! 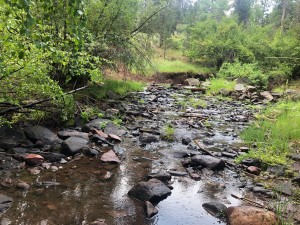 Led by Matt K.
There was construction at two bridges leading up to the Flaming Gorge dam, and Matt had to wait at one of the traffic lights controlling one-way sections of the road. Corrigan suddenly asked what number the trail had (it is FR 610) and said he saw the tiny white sign…
Join Us!
If you aren’t a Member or Subscriber, you can’t see all of the content on this site. Get membership information to see why this site is best when you join and log in