There was construction at two bridges leading up to the Flaming Gorge dam, and Matt had to wait at one of the traffic lights controlling one-way sections of the road. Corrigan suddenly asked what number the trail had (it is FR 610) and said he saw the tiny white sign with that road number to the right of the road where we were stopped in traffic. Matt would have missed it if it wasn’t for Corrigan spotting the sign! So Matt turned onto the trail and left the construction gridlock.

As Matt went up the steep hill at the start of Red Canyon Ridge, it started to rain. Well, drizzle and rain a bit. But we could still take in all the views going up. The trees didn’t form a thick forest. In fact, there were very many signs of previous fires or lightening strikes interspersed all over the area. We were trying to figure it if there had been one big fire or many individual small ones.

After some time, the trail started going downhill towards the northeast, and by this time the sun was starting to come out.

After the downhill section, Matt came up to small heavily treed canyon that had a sign that read the road is closed from August 15th to November 15th for big game protection. The gate was open to vehicles on that day, so Matt continued on. The trail was still around 3.5 miles longer after the gate.

The trail did go up and down hills with breaks of open fields. Soon after leaving the creek area, Dorit quipped “HELLO, BIG GAME!!! COME OUT AND LET US SEE YOU!” and just a minute or so later we came upon the first group of many cattle we would see along this area. It was really funny, but of course not the big game we had been hoping to see.

Near the end of Red Canyon Ridge, Matt came up to tree that fell over the trail, blocking it completely, but someone had cleared away a path around the fallen tree and it was clearly visible that vehicles had passed through there, so he continued on.

At the end of the Red Canyon Ridge trail, Matt stopped for lunch. We were right at “Lowline Trail,” a hiking trail going through these hills east to west. On our maps, it looked like Route 610 would stop at least a few hundred yards before the hiking trail, but we drove right up to it before we turned around for the drive back out. We had a great time on the way out, too, for a great day on the trail. 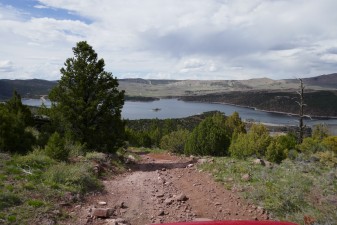 Led by Monica I.
Sometimes a trail really sneaks up on us, even with the GPS coordinates.  Moonshine Arch jumped out of nowhere that morning, and this time we were really taken by surprise.  We were going slowly along Highway 191 because we knew it was coming up, but still we bunched up at…
Join Us!
If you aren’t a Member or Subscriber, you can’t see all of the content on this site. Get membership information to see why this site is best when you join and log in