We met at the parking area for Fisher Towers, which meant that we had big scenery to start our day. Then we headed over to the Dewey Bridge to air down and get things ready. It's always depressing to see the remnants of the former bridge, but we always consider ourselves lucky to have crossed it when it was still intact. It was still fairly early when we headed down the end of Rose Garden Hill to the trailhead, practically right around the corner.

We were definitely surprised to find the trailhead closed with a front loader sitting in it. Luckily, the alternate entrance was still open just a bit down the road. It was still unmarked and looked barely used, but we were happy to find the trail wasn't closed.

It's a bumpy trail at the start, but we were still having a good time. Though we enjoyed the scenery the day before, it's always good to get on a bit of slickrock and find a few challenges. We worked our way up the hill of chunky rocks.

When we got to the "Y" intersection, we decided to do Pole Vault in the downhill direction so we kept going straight rather than veering to the right. We soon found another trail change, where the big corner had been cut off into a smaller loop on that end. It was never a very exciting end, so we were fine with it. When we got to the 4-way intersection we kept going straight.

It didn't take long to get to the River Overlook, where we parked and got out to check things out. There were a couple rafts in the water way below us, and we saw a few cars on the highway. We tried to memorize what the highway looked like so we could find it when we were on it later, but it was tough.

We were looking out toward I-70 when someone spotted a plane moving very fast. It was definitely a jet doing some sort of maneuvers. Then it headed straight up in the air with the smoke turned on, doing a huge loop for us to see. Our own air show! It was really cool and completely random. We watched for more, but it was just that one loop for us.

We soon got back into vehicles and headed back to the 4-way intersection, where we turned right to head out to the Powerline Overlook. It's a quick trip, and we would have the whole trail to ourselves while we were on it. We talked about how crazy those powerlines are, and after a while it's tough to look at them without falling over. We hung out there for a while, just checking out the scenery. It's such a cool area, and relatively easy to get to.

We did the loop there at the end and then came back to the 4-way intersection, going straight through it. That put us at the top of Pole Vault pretty quickly, where we got out to check it out. It was definitely more eroded since we were there last, but it wasn't crazy. We could have taken it in the uphill direction, but it would be much faster going downhill.

We each took our turn with help from spotters. It's a big drop-off at the ledge, but no one got hung up. The only time anyone got hung up was at the very top after Monica ran over a rock and her tire moved it to the center of the trail. It became a bit of a challenge to get around, but everyone succeeded.

When we got to the bottom we all got back in our Jeeps, but it was noon and we were next to a wide area of the trail. That's lunch, people! We drove a few more feet and then got back out. It was sunny so we found shade where we could, but the day was just about perfect.

It didn't take long to get back out to the trailhead where we had a discussion about what to do with the rest of our day. We had too many trails planned. We ended up deciding to do Top Of The World because it had been too long since we'd seen it. We headed over there after getting back onto the Rose Garden Hill trail. 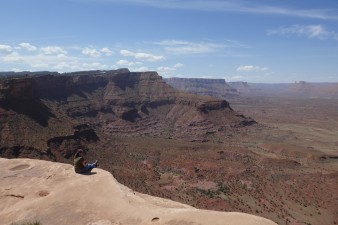