After a mild run on Badger Creek we were anxious to tackle something a little more challenging. Minesweeper is about as different from Badger Creek as two trails can get. We at least wanted to look at it, not knowing if everyone on the run would want to try Winch and Go, the first obstacle.

Since we had run Badger Creek in the reverse direction, the trailhead for Minesweeper was directly across Highway 50 from the end of Badger Creek. We all parked at the bottom of Winch and Go to scope it out. The first thing we noticed was that there were more rocks stacked at the bottom, making the initial approach easier. The three Jeep Unlimiteds would still drag their rear bumpers and tire carriers on the approach, however.

After scoping it out, Mike decided to give it a try. We had all used a safety strap our front bumpers last October, but we opted not to use one this time. Mike approached the obstacle, starting at the extreme right side, but angled up the sloping rock to place the passenger's side front tire on a knob of rock to get the front up and over the first step. At this point, Mike had to rely completely on his spotter as all he could see was the sky. After getting the passenger's side front up on the ledge, he had to make a sharp right turn to line his driver's side tire up with a ledge on the left. The correct line requires the driver's side tire to go up and over this ledge. While it does get tippy, the passenger's side rear tire is coming up at the same time and this helps to level the vehicle out.

After a couple attempts, Mike got his tire up and over the ledge, but he had too much momentum and the Jeep dropped hard on the driver's side rocker. This pitched the Jeep to the right and the passenger's side rear corner hit the rocks hard. Mike's rear corners are protected with steel plate that took the impact well, but the force did dimple the tub right above the rear wheel well. After jockeying back and forth to get the front differential past a rock, Mike was up and over the obstacle.

Next up was Jeff with his Unlimited. The line is slightly different for an Unlimited due to the added wheelbase length. Jeff had to take a few tries to get lined up right with the first ledge, but once he got his passenger's side tire up it the rest was a piece of cake, especially with his 37" tires.

Next up was Bill. He also needed a few tries to get up the first part of the obstacle. Once over the first ledge, he lined up with the second rock and got an impressive wheel stand. When his Jeep came down, it bounced the front to the right and Bill got a small souvenir in the form of a gouge on top of his front flare. Bill was up and over, however, and grinning.

Roger came next with another Jeep Unlimited. Once over the first ledge, he just drove through the rest of the obstacle, making it look easy, even if he also did come close to the rocks on the right. There's just no room for error on this one.

Todd was last in line. Some may like this position as they can learn from everyone else's attempts, but there's a lot of pressure on the driver if everyone else has made it. We didn't know Todd's comfort level on this type of obstacle since he was new to TrailDamage.com, but he was certainly not going to pass this up. Todd took the same line as the other Unlimiteds, and had the same difficulties getting lined up at the bottom of the obstacle. Once up the first part, he jockeyed for alignment on the knob of rock. After making it over this, he had issues with his bumper hitting the next rock and preventing him from getting his left tire up on it. After a pushing into the rock, his bumper bent enough to clear and he was quickly through the rest of the obstacle and breathing a sigh of relief. Luckily, he was already planning on an aftermarket bumper with more clearance.

Everyone had made it! Now there was nothing to do but get through Single Jack and Double Jack. There was a lot of wood stacked at the bottom of Single Jack that we moved out of the trail before we started it. Mike went up this obstacle and then on through Double Jack after positioning the Jeep so that the passenger's tires would run along the ridge of rock. Too far to the right and his tires would slip off, putting the front differential right into a rock. Too far to the left and his Jeep would get extremely tippy.

Everyone else came up through in turn, following the same path. After completing the obstacles, we proceeded up the trail to the "Y" where we would turn left to exit. Several spots were tippy, but nothing extreme. There were also several places with branches scraping the sides of the Jeeps because this trail doesn't see a lot of traffic.

We were soon back at the highway. We were all glad that we had the chance to run Minesweeper as Badger Creek had been such a mild trail. We aired up, reconnected, and were ready for the drive back home. But on the way we wanted to stop off back at the Liberty Trail trailhead to see if another TrailDamage.com group was still on the trail. We pulled into Penrose while there was still daylight so we headed out to the trailhead. We pulled up and couldn't hear anyone on the radio, so we thought we had missed them. We started to drive off, when Monica came on the radio. The group had been out of their Jeeps and hadn't heard us.

Mike walked down the trail to meet them, and the others walked along the edge of the gully overlooking the trail. Mark, Don, and Monica were quickly making their way out, finishing just before dark. We all talked for a while, but since everyone in Mike's group had a reason to get home, we broke back up into the two groups for the trip home. 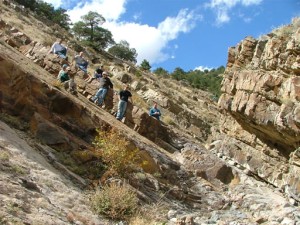 Led by Monica I.
We couldn’t wait to check out Minesweeper and Winch and Go, and they ended up being even better than we had hoped. It was pretty easy to find the trailhead with it marked in a GPS, though the dirt road off of the highway was difficult to see. As soon…
Join Us!
If you aren’t a Member or Subscriber, you can’t see all of the content on this site. Get membership information to see why this site is best when you join and log in