We couldn't wait to check out Minesweeper and Winch and Go, and they ended up being even better than we had hoped. It was pretty easy to find the trailhead with it marked in a GPS, though the dirt road off of the highway was difficult to see. As soon as we found the trailhead we could see Winch and Go down the road.

We started walking around on Winch and Go, Single Jack and Double Jack when some people on ATVs showed up at the top. They decided it was too big to take an ATV down, so they stayed awhile to watch, then they turned around and went back the way they came.

Monica got up on it first and found out that without a front locker this obstacle was going to be really difficult. She had her front tire in the air and the rear tires weren't gripping enough to get her through it. She backed down to let someone else try.

Cheryl got on it next and people spotted her to try to find the right line. She got up to the middle of it but then found that she couldn't turn hard enough to get around the big chunk of rock at the top. She backed down just a little and managed to make the turn. She ran her driver's side tire up and over the rock, then came down in the middle. It was a crazy line but it worked. She was up and through it.

Mike V. was next, and he hoped that his longer wheelbase would make up for no lockers. He gave a few different lines a try but nothing was working. He managed to pop off one of the corner panel protectors on his rear corner for his troubles. He had to back down.

Dane came up next and didn't have any troubles getting to the middle of Winch and Go. He ran hard into the big rock at the top with his bumper, then did what Cheryl did to get lined up better. A few of the people held his front end down with a strap, but he barely needed it. He bounced his way through the top and he was over it pretty quickly.

Mark came up next, and he didn't have any issues either, coming up and over it.

Jeff was next, and he went for the same line that Cheryl took. He didn't end up bouncing into the slot in the middle at the top, though. He ended up straddling the big rock at the top, but he had the clearance for it. He walked right over the obstacle.

Monica decided to winch up it. It ended up being a pretty simple winching, and she was up it right away. Mike V. was going to turn around, but he decided to get winched up it instead. Soon enough he was up it, too.

Mike S. was last up it, and he followed the correct line just right. He wallked over the tip of the rock outcropping at the top, and soon enough he was through it.

Single Jack was fun but no one had any real issues on it. It was a good group of rocky sections and holes, and it was fun.

Double Jack was really interesting. The line on the left looked just too crazy, so no one tried it. We all swung wide to the right and then did a three-point turn to get lined up with the top part of it. Then we all got tippy until we were through it. Mike V. had some issues and got really, really tippy but then he got through it too.

It was a blast to get to this point! There was no going down it -- Winch and Go was too big. We had to go forward.

We could tell that not too many vehicles had been to this point in awhile. The bottom of Winch and Go was wide and well-used, but after the obstacles the trail was faint and difficult to see in places. We had to weave through trees along the trail and no one got out of it with nice paint.

When we got to the intersection we kept going straight instead of turning left like we were supposed to. Soon the trail narrowed and ended and we were stuck. We had to back out. There was an old trail heading up and to the right, but it quickly ended too.

We followed the trail to the left up the hill, and it was well-used. The trip through Box Canyon was really cool and we really enjoyed it.

When we got out to the highway we aired up and reconnected and headed out to do Iron Chest as a night run on the way home. Mike V. lives in the area and he headed home for dinner. This trail was a blast! 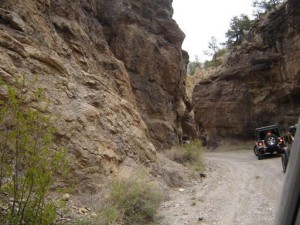 Led by Mike S.
After a mild run on Badger Creek we were anxious to tackle something a little more challenging. Minesweeper is about as different from Badger Creek as two trails can get. We at least wanted to look at it, not knowing if everyone on the run would want to try Winch…
Join Us!
If you aren’t a Member or Subscriber, you can’t see all of the content on this site. Get membership information to see why this site is best when you join and log in