The majority of the TrailDamage members were going to run Pritchett Canyon, but others opted for something a little less daunting. We met at the McDonald's at the designated time and discussed our options. The original plan had been to run Fins & Things, followed by Hell's Revenge. We changed those plans at the last minute because there were only two Jeeps opting for the saner trails, and Roger was leaving for Denver immediately after finishing the trail run.

We opted for La Sal Pass because we could then head up to the Colorado River and Highway 128 via Geyser Pass Road. This would allow us to run Top Of The World, which most of the others had run before we arrived.

We left the meeting area at 8:30(ish) while the rest of the group for Pritchett Canyon were still assembling. It seems that the late-night runs were beginning to take their toll! The forecast was high winds, partly cloudy and with a chance of afternoon rains. In other words, it was a perfect top-down day!

We started out driving down Highway 191. When we turned onto Spanish Valley Drive we found ourselves in the middle of a large organized road bicycle event. Driving Jeeps through a pack of bicycles slowed us down considerably, but we didn't hit anyone. We were glad to turn off onto Pack Creek Road and leave the pack behind. We would see some of them later, however.

Since we were already aired down and disconnected, we didn't even stop at the Pack Creek Recreation Area where the trail starts. The road was in good shape, although the surface was loose from being bladed recently. We climbed through the trees until we reached some openings where we could look back at the Moab area. We could make out the Behind The Rocks area as well as the Strike Ravine area where we had been the day before.

The aspen were at the peak of their color, and the pictures don't convey the majesty of the scenes unfolding around every corner. It was apparently hunting season as we met a couple quad-runners with rifles across the front and the riders decked out in bright orange. There was no other traffic and we would see later why that was.

We stopped for lunch in an aspen grove. It was beginning to get a little chilly because of the elevation and as clouds blew in. After lunch we continued on, still not meeting anyone. At about two-tenths of a mile from the pass, we came up to a blow-down across the road. Roger drove up to it, but the tree was too low to get under. It was a rather large tree, and we considered our options: an hour of chopping with an axe (more like a hatchet), or retracing our steps. We decided to try to chop our way through the tree and then winch the section off the trail. After chopping about halfway through, the tree suddenly snapped and broke, saving us more chopping!

Roger hooked up his winch to pull the section around out of our way. When the tree broke, it had sprung up a little, and with a little winching it continued to rise further. We moved it enough to drive under, and off we went.

After that we reached the pass and continued down to the end of the trail. We then took Geyser Pass Road over to Highway 126 and on to Castle Valley. We started up the Top Of The World trail, but heavy rain, approaching darkness, and Roger's realization that he needed enough gas to get into Colorado brought an end to our plans to bag that trail too. Oh well, there's always next year! 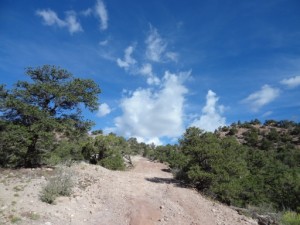 Led by Monica I.
We don’t usually spend time in the Moab desert in August and early September. We will wait until October, usually, so the temperatures are cooler. 2013 saw us baking in the Utah sun late in August on White Rim and in Canyonlands National Park, and we contemplated another day of…
Join Us!
If you aren’t a Member or Subscriber, you can’t see all of the content on this site. Get membership information to see why this site is best when you join and log in