We don't usually spend time in the Moab desert in August and early September. We will wait until October, usually, so the temperatures are cooler. 2013 saw us baking in the Utah sun late in August on White Rim and in Canyonlands National Park, and we contemplated another day of wheeling in the heat. We thought about doing a boat ride instead, but the times didn't work out. Then we had the bright idea to head up to the La Sal Mountains and it worked perfectly.

We wanted to do the loop of La Sal Pass and Geyser Pass, and we randomly chose to do La Sal Pass first. That ended up being the best choice. The climb up the pass was fun and rocky in spots. We started out on the fence about airing down, but then we were glad we did. It was definitely bumpy on the way up.

We crossed the creek without incident, even though we had a minor run-in with a cow. When we got to a wide spot, we all parked and got out to stretch our legs and the scenery was fantastic. Everything was very green, and there were even flowers in places. The temperatures were perfect, too, and it was such a nice break from the heat. We hung out for a while just enjoying the area.

We got up to the pass and we slowed down for some pictures but no one got out. Then we took the spur to Medicine Lakes and that was the highlight of the trail. We parked in the parking area and walked to the nearest lake, and it was so very perfect. The water was calm, with a duck enjoying the cool water. The mountains reflected off of the lake and it was very picturesque. We talked about how we could camp near the lake, but it was a long distance to haul our large amount of stuff. We were happy to settle for a day hike.

After the lakes the trail seemed to go by very quickly. Even though it's a big distance, it didn't seem to take long to get to the intersection with Geyser Pass. We all headed to the Geyser Pass trailhead and the parking area there to discuss plans. Matt had to head for home, and Les was done wheeling for the day. We said our goodbyes, and Julie and Monica headed off to do some more trails. It was a great trip through the mountains. 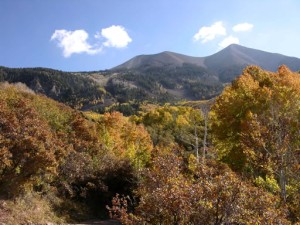 Led by Mike S.
The majority of the TrailDamage members were going to run Pritchett Canyon, but others opted for something a little less daunting. We met at the McDonald’s at the designated time and discussed our options. The original plan had been to run Fins & Things, followed by Hell’s Revenge. We changed…
Join Us!
If you aren’t a Member or Subscriber, you can’t see all of the content on this site. Get membership information to see why this site is best when you join and log in