Sadly, all good things must come to an end. It was Sunday and time to head home. There was time, however, for a quick run on the way out of Moab. We opted for Klondike Bluffs, a short but interesting trail because you got to see dinosaur footprints in the slickrock.

The trail follows a creek a short ways, either in the creek bed or beside it. After it leaves the creek, it begins to climb. After reaching the slickrock portion, Mike remembered that he hadn't been looking for the dinosaur tracks. He stopped to check the trail guide and when he got out he saw that he had parked right beside one! After rearranging a ring of stones to make it easier to see, Roger and Mike drove on.

After stopping briefly at the copper mine at the end of the trail, Mike and Roger hiked the short half-mile or so to the Klondike Bluffs overlook. The view into Arches National Park is worth the hike.

On the way out, Roger and Mike opted to take the optional spur, a portion of a trail called Baby Steps. This let us over to Salt Flats Road. Salt Flats Road was an easy way to exit the area and for the most part was smooth all the way to I-70 at Thompson. We aired up at the gas station in Thompson where they had a free air station. After four days of great trails, it was time to head back to Denver. 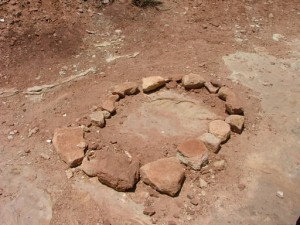 Led by Monica I.
A few of us ran Klondike Bluffs on the way out, and we had a great time. We also went shopping first, so we didn’t start the trail until much later than we had originally intended, so we finished a bit late. Still, it was worth it. We ran the…
Join Us!
If you aren’t a Member or Subscriber, you can’t see all of the content on this site. Get membership information to see why this site is best when you join and log in