A few of us ran Klondike Bluffs on the way out, and we had a great time. We also went shopping first, so we didn't start the trail until much later than we had originally intended, so we finished a bit late. Still, it was worth it.

We ran the trail with a few bicyclists, but we managed to keep out of the way. About halfway in, Michael's Jeep was overheating. He pulled off for a bit to let it cool down, and after that he didn't run the air conditioning anymore. It ran just fine from then on.

We were at the optional obstacle when that happened, and everyone had a few difficulties on it. It seemed like it would be easy, but then it wasn't. It was pretty fun.

The dinosaur tracks were very cool. They were all over the place, and there were many more than we were expecting. It was really cool to see.

This was the hottest day of the week, and it made the hike a little tough in places. When we got to the top, it leveled off and it was windy, so it was much easier. Some people hiked pretty far, and we spent a lot of time exploring. It was really beautiful up there.

We took the back way out, and we were pleasantly surprised to find some difficult spots going over the hill. It was a nice end to the trip, most definitely. After the hill, the way out was smooth and easy. It was nice, too, because it was the kind of terrain we didn't know was so far north of Moab.

We aired up at a big spot near Highway 191 and soon we were heading for home. It was an exhausting drive home, but we made it home in one piece. It was a great week! 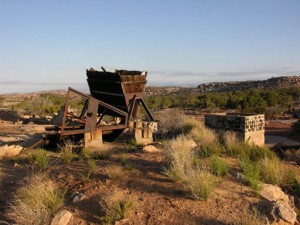 Led by Mike S.
Sadly, all good things must come to an end. It was Sunday and time to head home. There was time, however, for a quick run on the way out of Moab. We opted for Klondike Bluffs, a short but interesting trail because you got to see dinosaur footprints in the…
Join Us!
If you aren’t a Member or Subscriber, you can’t see all of the content on this site. Get membership information to see why this site is best when you join and log in