We had 15 vehicles for this run so we split it up into two runs, each an hour apart. We all ended up meeting at the end.

We had another large group for this run, and we had 6 new members all on one run which was a fun twist. It was a little chilly and it really rained hard while we were at the bridge, but we had a lot of fun on the whole trail.

We started at Yankee Doodle Lake and headed down the trail. We weren't too far into it when we ran across the first of many groups of wheelers coming the other direction. We always ended up being the biggest group, though, and everyone was really nice about pulling off to the side so we could squeeze through. We were passing a group of wheelers when we came to the first small obstacle with the drop-off, so we didn't stop to take pictures. Everyone made it through just fine.

When we passed another group, we noticed it was noon already and we were at a flat spot with plenty of room to move off to the side. We pulled off and had a nice lunch (though the moisture was really bringing out the mosquitoes).

As always, it was pretty mellow and rocky until we got to the first place where you run with the creek. Everyone commented on how fun it was to drive in a creek -- and it is a really cool experience!

The second bit of trail that you get to run in the creek has sides that are easier to get to, so a lot of us stopped in a line and got out to take pictures. There were still too many of us to fit but it was cool to see.

When we got to the area with the bridge it was a little disappointing to find the big rock in the middle of the trail gone. It was a fun challenge and we missed it. The creek and the bridge were still challenging, and we each took our turn.

Monica made it through without denting her bumper (unlike last time) just as it was starting to rain. Then as everyone started coming through it kept raining harder until it was really pouring.

Sean was the first one to try the bridge and he tried to crawl it, but his wheelbase was perfect for getting stuck. He had his front tires off one end and his rear tires off the other end and he wasn't going anywhere. He tried for a bit but Dave ended up giving him a little tug to get off the bridge.

J and Mike both did the bridge without any issues (they took it a little faster) and Gary brought up the end of the group.

We finished up the trail with everyone doing the big hill at the end. With all of the rain it was pretty soggy and it made it that much more fun. Once we got to the top some of the group had to go while others went on to Kingston Peak. It was a great day!

Only four of the expected eight vehicles showed up, so we gave a little more head-start before beginning the trail so we wouldn't catch up with the much larger first group.

We began at Yankee Doodle Lake and headed down the trail. It was somewhat wet, but there was still plenty of traction in the wet dirt and rocks. It didn't take long to meet the first group of wheelers on the trail. In all, we met about four other groups going the other way, pulling off for some, and some pulling off for us.

We first stopped at a medium rock that offers a good chance to pose for a flex shot, then moved on. We traveled at a decent pace, enjoying the scenery but continuing on with few stops.

We came to the first portion of the trail that goes down the middle of the creek, and those who had not done Jenny Creek before (Bill, Bryan, and Heather) enjoyed the novelty of driving in the rushing, crystal-clear water. It's is always a fun experience driving down the creek. Ladd's son took pictures as the vehicles entered the water in both creek driving sections. He hiked along the bank next to us in the second creek section, taking pictures as we drove along, finally
jumping into Ladd's Jeep before we proceeded too far along.

No one had trouble with the sometimes slippery climb out of the second creek section, and we continued on. By this time, we began hearing chatter from the first TrailDamage run further up the trail from us. We soon found they were at the creek crossing, so we knew we weren't too far behind. We were all hungry as it was about 2PM by this time, and decided to stop for lunch in a clearing that provided just enough room for all four of us to pull off.

After lunch, we continued on to the final creek crossing where the washed out bridge is. We were disappointed to see a large boulder in the approach to the crossing had been moved out of the way, but there was a boulder moved more into the path of the crossing, which provided a fun new challenge. All of us enjoyed posing on this rock, using our rocker panel protection to cross it, as it was rather tall. No one got any damage, though.

After everyone went through the creek, Bob decided to go through one more time, because he wanted to get a couple more photos, and for the chance to climb the hill we had just descended on the far side.

Once Bob was through going through the creek once more we proceeded along to the end of the run, playing on the steep, loose hill and then finally reaching the dirt road back to the trailhead.

We finally caught up with the remaining members of the early run back at the bottom -- they were waiting to see if any of us wanted to continue on to the Kingston Peak trail with them. We all had a great time playing on the unique Jenny Creek trail. 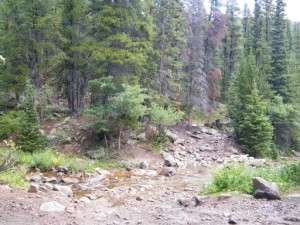