What would a trip to Alamosa be without Hermit Pass on the way? It's one of our favorites so we had to visit it again. We had a nice trip to Westcliffe where we found a gas station and a big lot where Mark could leave his truck and trailer. Then we headed for the trail.

We forgot to air down in town so we had to pull off about halfway to the trailhead to air down. The dirt road on the way there is a washboard and it wasn't pleasant on aired-up tires. When we got to the actual trailhead we just kept on going.

There were a few vehicles and ATVs here and there but nothing like what we've seen before. Traffic was fairly light. We talked about the slow-moving SUVs with fully inflated tires and about how bad the ride must be. Hermit Pass is one of the bumpiest trails we know of and it must be miserable with hard, inflexible tires.

The trail's weather started out really nice but as we climbed it really cooled off. We hoped to eat lunch at the top or at least above timberline but the clouds were really rolling in. It looked like rain so we pulled off at a big switchback for lunch.

Lunch was nice and you could tell everyone was looking foward to three days away from the daily grind. We stayed for a while, chatting and laughing. But we had miles to do yet so we headed up to the top.

It was barely sprinkling and it never really rained as we climbed. Still, it was chilly and it was really windy at the top. We got out and wandered around the top for a little while but soon it started raining. Most of us managed to get our tops up and windows in and back to our vehicles before it really started raining. And then it started hailing.

We didn't spend that much time at the top, unfortunately. The weather just turned too nasty. So we worked our way down and out of the hail.

The trip down to the trailhead was uneventful for everyone but Mike. We were almost back to timberline when he pulled over to check out a clunking noise, only to find that he completely lost a bolt on an upper control arm. The guys dug through their spare parts and managed to find a replacement bolt and nut. It wasn't a tight fit and Mike would listen to the rattle for the rest of the trip. But at least it was securely fastened.

Once we got back to Westcliffe Mark put his Jeep back on his trailer and we aired up. We planned to head for Alamosa, taking Pass Creek Pass along the way to shorten the distance. Even with the hail, Hermit Pass is still a favorite. 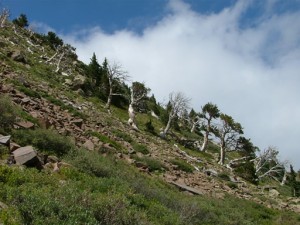 Led by Monica I.
Hermit Pass is one of the most beautiful trails in Colorado, and it’s a fairly mellow drive all the way over 13,000 feet. That’s why we made sure we got to see it on our way down to Alamosa. It was supposed to rain, so we were prepared. When we…
Join Us!
If you aren’t a Member or Subscriber, you can’t see all of the content on this site. Get membership information to see why this site is best when you join and log in